Tuesday Intro: The Story of a New Name 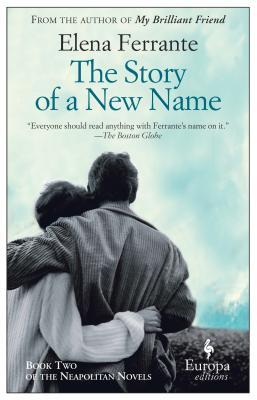 In the spring of 1966, Lila, in a state of great agitation, entrusted to me a metal box that contained eight notebooks. She said that she could no longer kept them at home, she was afraid her husband might read them. I carried off the box without comment, apart from some ironic allusions to the excessive amount of string she had tied around it. At that time our relationship was terrible, but it seemed that only I considered it that way. The rare times we saw each other, she showed no embarrassment, only affection; a hostile word never slipped out.

When she asked me to swear that I wouldn't open the box for any reason, I swore. But as soon as I was on the train, I untied the string, took out the notebooks, began to read. It wasn't a diary, although there were detailed accounts of the events in her life, starting with the end of elementary school. Rather, it seemed evidence of a stubborn self-discipline in writing...

The Story of a New Name
(Neapolitan Novels, Book 2)
by Elena Ferrante

I read My Brilliant Friend  a couple of months ago and knew it was just a matter of time before I returned to that poor, bustling neighborhood on the outskirts of Naples. This series of novels explores the complicated friendship between two women at various stages in their lives. Book One ended with the marriage of Lila (at 16) and this installment picks up shortly afterwards. I started last night and don't want to put it down.

Want to know more? Here is the goodreads summary:


The second book, following 2012’s acclaimed My Brilliant Friend, featuring the two friends Lila and Elena. The two protagonists are now in their twenties. Marriage appears to have imprisoned Lila. Meanwhile, Elena continues her journey of self-discovery. The two young women share a complex and evolving bond that brings them close at times, and drives them apart at others. Each vacillates between hurtful disregard and profound love for the other. With this complicated and meticulously portrayed friendship at the center of their emotional lives, the two girls mature into women, paying the sometimes cruel price that this passage exacts.

If you're interested in giving the series a try, the first book is just $2.99. I'm not sure how long the deal will last. But be careful... you may succumb to #FerranteFever, too!

Every Tuesday, Diane at Bibliophile by the Sea posts the opening paragraph (sometime two) of a book she decided to read based on the opening. Feel free to grab the banner and play along.
Posted by JoAnn at 5:30 AM