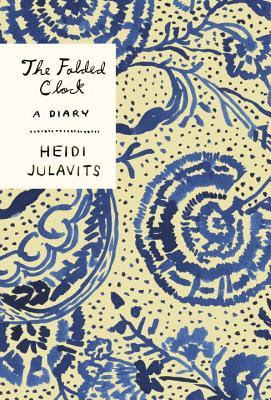 Today I wondered What is the worth of a day?  Once, a day was long. It was bright and then it wasn't, meals happened, and school happened, and sports practice, maybe, happened, and two days from this day there would be a test, or an English paper would be due, or there would be a party for which I'd been waiting, it would seem, for years. Days were ages. Love bloomed and died in a day. Rages flared and were forgotten and were replaced by new rages, also forgotten. Within a day there were discernible hours, and clocks with hands that ticked out each new minute. I would think, Will this day never end?  By nightfall, I'd feel like a war had been fought. I was wounded; sleep was not enough to heal me. Days would linger in my nerves, aftershocks registered on the electrical plain. Days made a physical impact. Days could hurt.

The Folded Clock: A Diary
by Heidi Julavits

A few of my library holds came in last week, including this book, which has surprised me... first the physical beauty of the hardcover edition (I may want one of my own) and then the beauty of the opening entry. I haven't seen many reviews yet, but I really like writing style and am hopeful it will continue like this. It seems like a book to read slowly, maybe a few entires per day.


Like many young people, Heidi Julavits kept a diary. Decades later she found her old diaries in a storage bin, and hoped to discover the early evidence of the person (and writer) she’d since become. Instead, "The actual diaries revealed me to possess the mind of a paranoid tax auditor." The entries are daily chronicles of anxieties about grades, looks, boys, and popularity. After reading the confessions of her past self, writes Julavits, "I want to good-naturedly laugh at this person. I want to but I can't. What she wanted then is scarcely different from what I want today."

Thus was born a desire to try again, to chronicle her daily life as a forty-something woman, wife, mother, and writer. The dazzling result is The Folded Clock, in which the diary form becomes a meditation on time and self, youth and aging, betrayal and loyalty, friendship and romance, faith and fate, marriage and family, desire and death, gossip and secrets, art and ambition. Concealed beneath the minute obsession with “dailiness” are sharply observed moments of cultural criticism and emotionally driven philosophical queries.  In keeping with the spirit of a diary, the tone is confessional, sometimes shockingly so, as the focus shifts from the woman she wants to be to the woman she may have become.

Julavits's spirited sense of humor about her foibles and misadventures, combined with her ceaseless intelligence and curiosity, explode the typically confessional diary form.  The Folded Clock  is as playful as it is brilliant, a tour de force by one of the most gifted prose stylists in American letters.

Every Tuesday, Diane at Bibliophile by the Sea posts the opening paragraph (sometime two) of a book she decided to read based on the opening. Feel free to grab the banner and play along.
Posted by JoAnn at 6:02 AM