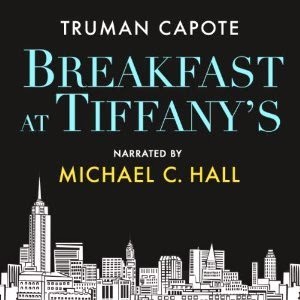 Publisher's Summary:
Golden Globe-winning actor Michael C. Hall (Dexter, Six Feet Under) performs Truman Capote's provocative, naturalistic masterstroke about a young writer's charmed fascination with his unorthodox neighbor, the "American geisha" Holly Golightly. Holly - a World War II-era society girl in her late teens - survives via socialization, attending parties and restaurants with men from the wealthy upper class who also provide her with money and expensive gifts. Over the course of the novella, the seemingly shallow Holly slowly opens up to the curious protagonist, who eventually gets tossed away as her deepening character emerges.

Breakfast at Tiffany's, Truman Capote's most beloved work of fiction, introduced an independent and complex character who challenged audiences, revived Audrey Hepburn's flagging career in the 1961 film version, and whose name and style has remained in the national idiom since publication. Hall uses his diligent attention to character to bring our unnamed narrator’s emotional vulnerability to the forefront of this American classic.

I am surely the only person on the planet who has never seen the 1961 film starring Audrey Hepburn. I do know that the plot differs significantly from the novella and have always thought I should read Capote's words first. Although I've had a beautiful hard cover Modern Library edition (purchased at Border's going out of business sale) on my shelf for years, I couldn't pass up the opportunity to grab the audio when it was offered as an audible daily deal.

I've read Capote before. In Cold Blood  was quite a page-turner and "A Christmas Memory" is one of my favorite short stories, but I felt distanced from this work right away. Maybe it was due to the narration, maybe that was Capote's intent. For whatever reason, it just didn't click. Written in 1958, it also struck me as dated.

As I listened, The Great Gatsby  frequently came to mind. The narrators of both novels are similar in quality and voice, and I liked them much more than the title characters. Holly could have been a female version of Gatsby himself.... not entirely what she seems, not necessarily totally above board.

A quick search of google revealed, as expected, that this was by no means an original thought. The similarity has been been duly noted in The Guardian, and my blogging friend Jane posted on this topic years ago. With these thoughts fresh in my mind, it must be time to reread  The Great Gatsby... yet again.

Strangely, I have nothing further to say about the narration of this audio production. It was fine... distancing as noted above, but otherwise unremarkable.