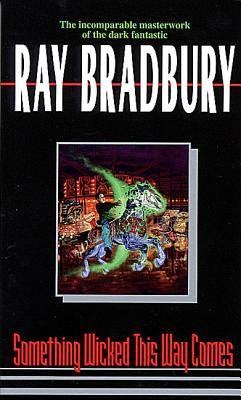 First of all, it was October, a rare month for boys. Not that all months aren't rare. But there be bad and good, as pirates say. Take September, a bad month: school starts. Consider August, a good month: school hasn't begun yet. July, well, July's really fine: there's no chance in the world for school. June, no doubting it, June's best of all for the school doors spring wide and September's a billion years away.

But you take October, now. School's been on a month and you're riding easier in the reins, jogging along.  You got time to think of the garbage you'll dump on old man Prickett's porch, or the hairy-ape costume you'll wear to the YMCA the last night of the month. And if it's around October twentieth and everything smoky-smelling and the sky orange and ash gray at twilight, it seems Halloween will never come in a fall of broomsticks and a soft flap of bed-sheets around corners.

Something Wicked This Way Comes
by Ray Bradbury

I haven't read Ray Bradbury since high school - Fahrenheit 451, I think. Back then, I wasn't much of a fan, but it's high time to try again and Ti and Sandy's readalong is the perfect motivation. I read the first four chapters Sunday evening and was pleasantly surprised. 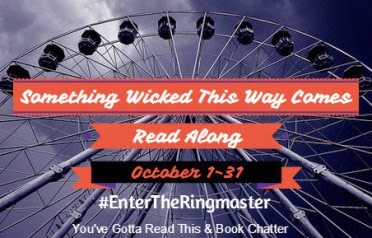 The goodreads summary provides a few more clues about what is to come:


A masterpiece of modern Gothic literature, Something Wicked This Way Comes is the memorable story of two boys, James Nightshade and William Halloway, and the evil that grips their small Midwestern town with the arrival of a “dark carnival” one Autumn midnight. How these two innocents, both age 13, save the souls of the town (as well as their own), makes for compelling reading on timeless themes. What would you do if your secret wishes could be granted by the mysterious ringmaster Mr. Dark? Bradbury excels in revealing the dark side that exists in us all, teaching us ultimately to celebrate the shadows rather than fear them. In many ways, this is a companion piece to his joyful, nostalgia-drenched Dandelion Wine, in which Bradbury presented us with one perfect summer as seen through the eyes of a 12-year-old. In Something Wicked This Way Comes, he deftly explores the fearsome delights of one perfectly terrifying, unforgettable autumn.

What do you think of the opening? Would you keep reading? It's not too late to join the readalong, you know.

Every Tuesday, Diane at Bibliophile by the Sea posts the opening paragraph (sometime two) of a book she decided to read based on the opening. Feel free to grab the banner and play along.
Posted by JoAnn at 8:31 AM

Email ThisBlogThis!Share to TwitterShare to FacebookShare to Pinterest
Labels: Quote of the Week, read-alongs