Tuesday Intro: Starting Out in the Evening 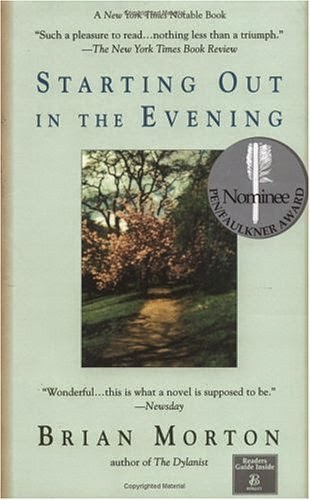 Heather was wearing the wrong dress. It had seemed like a good idea in the morning - it was a tight little black thing; she'd looked fantastic in the mirror - but now she was thinking that she should have worn something more demure. This was a foolish dress to meet your intellectual hero in.

Waiting in the coffee shop for the great man to arrive, Heather was squirming with nervousness, and she began to wonder why she was here - why she had gone to such lengths to meet this man, when she knew he couldn't possibly be as interesting in person as he was in his books. She had a wild urge to flee - to scribble a note of apology, leave it with the waiter, and drive all the way back to Providence. But she stayed where she was. She was nervous; she was a little scared; but she could live with that. Fear of any undertaking, to her way of thinking, was usually a reason to go ahead with it.

The door opened and a man came in from the cold. He was wearing an enormous coat - a coat that was like a house - and a big, furry, many-flapped hat. He peeled off the hat and stopped for a moment in front of the cash register, stamping off the snow. He was wearing galoshes

They had never met, but he picked her out instantly, and he came toward her, smiling. Old, fat, bald, leaning awkwardly on a cane. The man of her dreams.

Starting Out in the Evening
by Brian Morton

This is actually the entire first chapter of Brian Morton's 1998 novel, and the second of his books I have picked up in as many weeks. I loved his most recent novel, Florence Gordon, and started reading this one just a few days later. I'm only 50 pages in, but love the writing and am enjoying getting to know the three main characters. I think this will be another winner.

Here is a summary from Library Journal:


In beautifully nuanced scenes, Heather Wolfe, a 24-year-old graduate student, forces a meeting with broken-down Leonard Schiller, an out-of-print, sick old writer whose early works, written during the heyday of 1940s and 1950s New York intellectualism, forever changed Heather's life. Targeted as the subject of Heather's master's thesis, Schiller quickly falls under the seductive promise of her admiration, much to the distress of Ariel, his 39-year-old daughter, whose own struggles with failed romance and childlessness derail her energy. Morton demonstrates an astonishingly sensitive appreciation for his characters as he reveals with unnerving accuracy the most private thoughts not only of his women but of the dying old man as well. These mismatched souls gradually realize that their individual journeys, which they thought were drawing to a close, are in fact new beginnings. Morton's respect for his characters and his audience is a quiet literary triumph. Highly recommended.

What do you think of the first chapter? Would you keep reading?