Tuesday Intro: A Murder is Announced 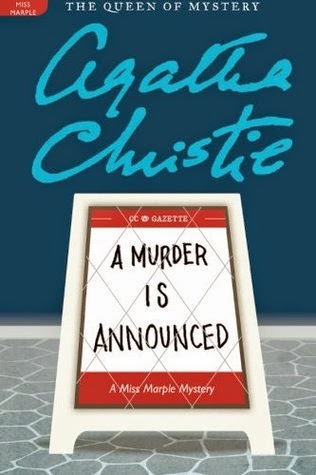 At all these houses, and indeed at practically every house in Chipping Cleghorn, he delivered every Friday a copy of the North Benham News and Chipping Cleghorn Gazette, known locally simply as "the Gazette."

A Murder is Announced
by Agatha Christie

This opening doesn't give much of a plot hint, but I appreciate how Agatha Christie sets the scene and lists the players. As the opening continues, we get more of a sense of the tiny village and its quirky inhabitants.

I started A Murder is Announced over the weekend to kick off Carl's R.I.P. IX event. Christie is also on my Classics Club list, and Katherine can be very persuasive, too. Here's the goodreads summary:


The villagers of Chipping Cleghorn, including Jane Marple, are agog with curiosity over an advertisement in the local gazette which read: 'A murder is announced and will take place on Friday October 29th, at Little Paddocks at 6:30 p.m.' Unable to resist the mysterious invitation, a crowd begins to gather at Little Paddocks at the ppointed time when, without warning, the lights go out ...

Would you keep reading? Are you an Agatha Christie fan?

Every Tuesday, Diane at Bibliophile by the Sea posts the opening paragraph (sometime two) of a book she decided to read based on the opening. Feel free to grab the banner and play along.
Posted by JoAnn at 8:56 AM