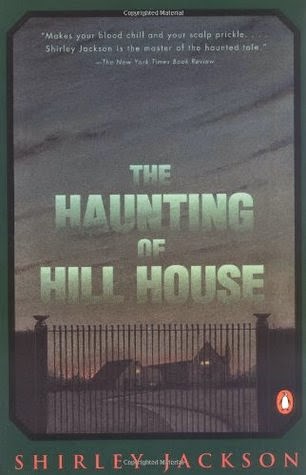 No live organism can continue for long to exist sanely under conditions of absolute reality; even larks and katydids are supposed, by some, to dream. Hill House, not sane, stood by itself against its hills, holding darkness within; it had stood so for eighty years and might stand for eighty more. Within, walls continued upright, bricks met neatly, floors were firm, and doors were sensibly shut; silence lay steadily against the wood and stone of Hill House, and whatever walked there, walked alone.

The Haunting of Hill House
by Shirley Jackson

I sat down to begin The Haunting of Hill House on Saturday afternoon, posted a photo on Instagram, and received an interesting piece of advice shortly afterwards: Do not read this book before bedtime! Horror isn't my usual genre, so of course that got my attention.

A quick look at the goodreads summary convinced me not to take any chances.


First published in 1959, Shirley Jackson's The Haunting of Hill House has been hailed as a perfect work of unnerving terror. It is the story of four seekers who arrive at a notoriously unfriendly pile called Hill House: Dr. Montague, an occult scholar looking for solid evidence of a "haunting"; Theodora, his lighthearted assistant; Eleanor, a friendless, fragile young woman well acquainted with poltergeists; and Luke, the future heir of Hill House. At first, their stay seems destined to be merely a spooky encounter with inexplicable phenomena. But Hill House is gathering its powers—and soon it will choose one of them to make its own.

The Estella Society is hosting a readalong in conjunction with the R.I.P. IX challenge. It runs through the end of the month, so there's plenty of time if you'd like to join us... there's safety in numbers!

What do you think of the intro? Are you brave enough?

Every Tuesday, Diane at Bibliophile by the Sea posts the opening paragraph (sometime two) of a book she decided to read based on the opening. Feel free to grab the banner and play along.
Posted by JoAnn at 7:11 AM

Email ThisBlogThis!Share to TwitterShare to FacebookShare to Pinterest
Labels: Quote of the Week, read-alongs