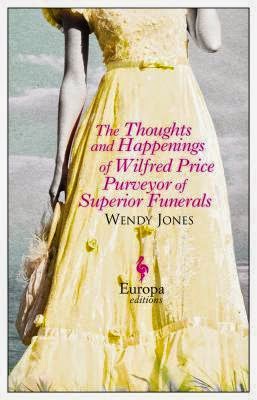 The Thoughts and Happenings of Wilfred Price Purveyor of Superior Funerals
by Wendy Jones
Europa, 2014
(originally published in 2012)
273 pages
source: ebook from library

Summary (from goodreads):
Under the heady influence of a springtime picnic and vague notions of obligation, young undertaker Wilfred Price blurts out a marriage proposal to a woman he barely knows. Much to his consternation, she says yes. As Wilfred attempts to extricate himself from the situation, his betrothed’s overbearing father presents further complications. And when Wilfred meets another woman he does wish to marry, a comedy of manners ensues. Set in rural Wales during the 1920s, Wendy Jones’s charming first novel is a deceptive, subtly humorous entrance to the mores and social conventions of a world gone by.

“It was because of a yellow dress. She was wearing a yellow dress and her arms were bare. It was slightly tart, the colour of lemon curd. He couldn’t remember seeing a dress in that shade before. It was pleated silk and sleeveless, with a low waistband and a square neck that was slightly too low, perhaps only by half an inch.  Wilfred wondered how she got the dress on. Maybe there were hooks and eyes hidden on the side, under her arm. Ladies dresses sometimes had those. Women hooked and encased themselves in their dresses but there was always a way out."

My blogging friends deserve total credit for leading me to this book. I caught my first glimpse of the gorgeous cover on Audrey's blog, and added it to my wish list after reading her review. Just days later, Diane seconded her high opinion. Being a Europa edition only added to its appeal.

Set in Wales, the novel offers a look at customs and societal norms surrounding courtship and marriage in the 1920's. I was expecting nothing but sweetness (judging from the cover and description), but a surprisingly dark twist added both depth and interest to the novel.

As for Wilfred himself, he seemed hapless, spinelessness, and at times, drove me crazy. There were moments when I wanted to shake him. However, his character does seem to grow and, as the novel progresses, there are signs of an emerging backbone.

Overall, this book was a very pleasant surprise for me. My mother read it, too, but she was put off by the somewhat open ending (she likes her novels a little more neatly packaged, I think). Further investigation turned up a sequel, The World is a Wedding. It does not appear to be readily available in the US, but I'd sure like to find a copy.

According to the Europa website, The Thoughts and Happenings of Wilfred Price Purveyor of Superior Funerals has been optioned for a mini-series by the company that produces Downton Abbey for the BBC and PBS. I can't wait.