We Are Not Ourselves by Matthew Thomas 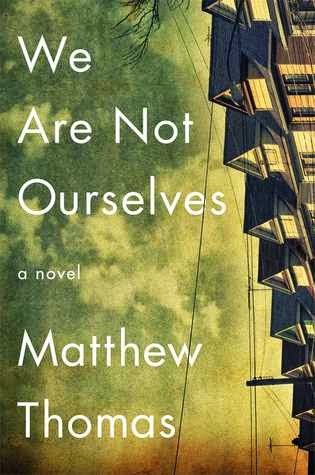 We Are Not Ourselves
by Matthew Thomas
Simon & Schuster, 2014
640 pages
source: Netgalley (via publisher for review consideration)

Born in 1941, Eileen Tumulty is raised by her Irish immigrant parents in Woodside, Queens, in an apartment where the mood swings between heartbreak and hilarity, depending on whether guests are over and how much alcohol has been consumed.

When Eileen meets Ed Leary, a scientist whose bearing is nothing like those of the men she grew up with, she thinks she’s found the perfect partner to deliver her to the cosmopolitan world she longs to inhabit. They marry, and Eileen quickly discovers Ed doesn’t aspire to the same, ever bigger, stakes in the American Dream.

Eileen encourages her husband to want more: a better job, better friends, a better house, but as years pass it becomes clear that his growing reluctance is part of a deeper psychological shift. An inescapable darkness enters their lives, and Eileen and Ed and their son Connell try desperately to hold together a semblance of the reality they have known, and to preserve, against long odds, an idea they have cherished of the future.

Through the Learys, novelist Matthew Thomas charts the story of the American Century, particularly the promise of domestic bliss and economic prosperity that captured hearts and minds after WWII. The result is a riveting and affecting work of art; one that reminds us that life is more than a tally of victories and defeats, that we live to love and be loved, and that we should tell each other so before the moment slips away.

Epic in scope, heroic in character, masterful in prose, We Are Not Ourselves heralds the arrival of a major new talent in contemporary fiction.

We Are Not Ourselves is a beautifully written, profoundly real, and emotionally devastating novel. I finished the book weeks ago, yet it continues to weigh heavily on my mind.

This is the debut novel everyone is talking about. It has been described as everything from a family saga to the new Great American Novel. Since its focus is on a single family unit, I wouldn't necessarily call it a saga, but it definitely has all the characteristics of  a great American novel.

We Are Not Ourselves  begins with an Irish immigrant couple in Queens and their only child, Eileen. She takes center stage early on. What follows is basically her story - her yearnings, struggles and strivings for a better life, her pursuit of the American Dream, and the obstacles she encounters along the way.

Eileen pins her hopes on scientist Ed Leary. They marry and have a son, Connell (named for the author of the novel Mrs. Bridge, which Eileen encounters during pregnancy). Eileen pushes her family onward and upward, but it's obvious Ed does not share her aspirations. He takes comfort in routine and resists change.

As Ed enters his fifties, he becomes withdrawn, easily confused, and even more adamant in his insistence on maintaing the status quo. Eileen is painfully slow in figuring out what's happening to her husband, but most readers will certainly guess the true nature of Ed's problem. Once it is spelled out and his illness is labeled, the novel becomes sadder and increasingly difficult to read... especially for the reader who has experienced similar life events.

In the second half of the novel, the family comes to terms with Ed's illness and attempts to move forward. Connell, who had been in the background, begins to play a larger role. None of the characters are especially likable, but they all ring true. Small human dramas play out in their everyday lives. It is interesting that the author chose to keep Ed's own story and experiences out of the narrative.

Also of note, I took great delight in the author's vocabulary and word choice. I will certainly read whatever Matthew Thomas writes next.

Bottom line:  I was totally consumed by We Are Not Ourselves and do not remember the last time a book had such a profound emotional impact on me.