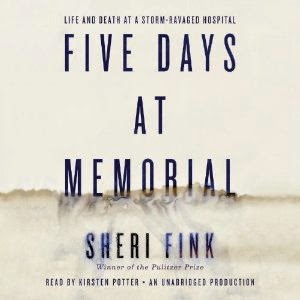 In the tradition of the best writing on medicine, physician and reporter Sheri Fink reconstructs five days at Memorial Medical Center and draws the listener into the lives of those who struggled mightily to survive and to maintain life amidst chaos.

Five Days at Memorial, the culmination of six years of reporting, unspools the mystery of what happened in those days, bringing the listener into a hospital fighting for its life and into a conversation about the most terrifying form of health care rationing.

In a voice at once involving and fair, masterful and intimate, Fink exposes the hidden dilemmas of end-of-life care and reveals just how ill-prepared we are in America for the impact of large-scale disasters - and how we can do better. A remarkable book, engrossing from start to finish, Five Days at Memorial radically transforms your understanding of human nature in crisis.

"Emergencies are crucibles that contain and reveal the daily, slower-burning problems of medicine and beyond - our vulnerabilities; our trouble grappling with uncertainty, how we die, how we prioritize and divide what is most precious and vital and limited; even our biases and blindnesses."

In a way, Five Days at Memorial seemed like two books. The first part focuses on Hurricane Katrina at Memorial Hospital - the storm itself, patient care and relief/evacuation efforts during the following days, and how management, staff and patients coped. It details the horrifying conditions and immeasurable human suffering endured by those within the hospital. The second part of the book deals with the aftermath of all that occurred during those five days - the investigation, allegations of euthanasia, and its ramifications.

This book held me spellbound for nearly two weeks. I have spent many years working in large, teaching hospitals and was utterly shocked by the lack of preparedness and breakdown of communication detailed in this book. As a former health care worker, I found it hard to believe that these events could have occurred in the 21st century United States. I admired the workers, both medical and support staff, who stayed and devoted themselves to patient care under such desperate and deplorable conditions. It is difficult to predict how one might react under such circumstances and even harder to judge professional decisions made at such a time.

If there is a bright spot in this book, it lies in the contrast with one New York City hospital during Superstorm Sandy. Perhaps lessons were learned.

A note on the audio production:
Kristin Potter, with over 150 audiobook credits, is a narrator I will listen to without hesitation. Her voice is clear and strong, with just the right amount of authority necessary for narrating a piece of investigative journalism. Overall, a perfect match for this book.