The Ship of Brides by Jojo Moyes 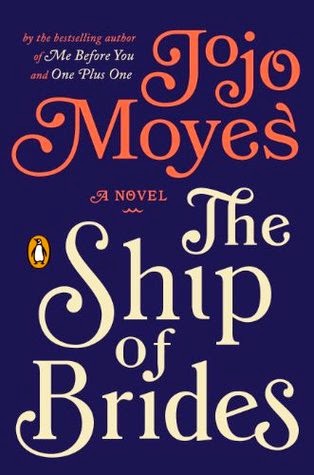 The Ship of Brides
by Jojo Moyes
Penguin Books, 2014
originally published in 2005
496 pages
source: Netgalley (via publisher for review consideration)

The year is 1946, and all over the world, young women are crossing the seas in the thousands en route to the men they married in wartime - and an unknown future. In Sydney, Australia, four women join 650 other brides on an extraordinary voyage to England, aboard the HMS Victoria, which also carries not just arms and aircraft but 1,000 naval officers and men. Rules of honour, duty, and separation are strictly enforced, from the aircraft carrier's captain down to the lowliest young stoker. But the men and the brides will find their lives intertwined in ways the Navy could never have imagined.

Jojo Moyes has done it again! Actually, she did it about ten years ago, but The Ship of Brides  has recently become available to US readers in digital format, with the paperback release scheduled for later this fall.

Since December, I have read four of  Jojo Moyes' novels and am struck by how different they are. Some authors seem to hit upon a formula or theme and rework it again and again, while each of Moyes' novels seems fresh and new. Me Before You  is a contemporary story told from alternating viewpoints, The Girl You Left Behind  features dual story lines, past and present, which ultimately converge, and Honeymoon in Paris is a novella and prequel to The Girl You Left Behind.

The Ship of Brides is basically historical fiction with a present-day beginning and end. After WWII, hundreds of young Australian brides board a navy ship which will carry them to England to be reunited with their new husbands. I love it when some small kernel of history provides fodder for a novel, and the post-war time period is a favorite. The combination of brides, crew, close quarters, and a long journey certainly makes for some interesting reading.

Moyes gives us a wide variety of characters whose dialog and interactions always ring true. However, the number of characters made the beginning of the novel slow-going for me. I read the first several chapters in small, short bursts over the course of nearly a week and initially had a hard time keeping the characters straight. Perhaps that would not have been the case if I'd read the first few chapters in one sitting. That being said, I tore through the last half of The Ship of Brides  in under 24 hours - simply couldn't put it down!

As Jojo Moyes continues to work on new novels, US readers can now wander through her backlist. I, for one, look forward to the journey.