The Invention of Wings by Sue Monk Kidd 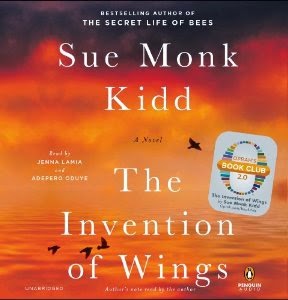 Publisher's Summary:
Hetty “Handful” Grimke, an urban slave in early nineteenth century Charleston, yearns for life beyond the suffocating walls that enclose her within the wealthy Grimke household. The Grimke’s daughter, Sarah, has known from an early age she is meant to do something large in the world, but she is hemmed in by the limits imposed on women.

Kidd’s sweeping novel is set in motion on Sarah’s eleventh birthday, when she is given ownership of ten year old Handful, who is to be her handmaid. We follow their remarkable journeys over the next thirty five years, as both strive for a life of their own, dramatically shaping each other’s destinies and forming a complex relationship marked by guilt, defiance, estrangement and the uneasy ways of love.

As the stories build to a riveting climax, Handful will endure loss and sorrow, finding courage and a sense of self in the process. Sarah will experience crushed hopes, betrayal, unrequited love, and ostracism before leaving Charleston to find her place alongside her fearless younger sister, Angelina, as one of the early pioneers in the abolition and women’s rights movements.

Inspired by the historical figure of Sarah Grimke, Kidd goes beyond the record to flesh out the rich interior lives of all of her characters, both real and invented, including Handful’s cunning mother, Charlotte, who courts danger in her search for something better.

This exquisitely written novel is a triumph of storytelling that looks with unswerving eyes at a devastating wound in American history, through women whose struggles for liberation, empowerment, and expression will leave no reader unmoved.

It's always a good thing when a novel sends me back to my history books. I had heard that the Grimke sisters in The Invention of Wings were real people, but that fact slipped my mind until I was almost halfway through the book. Once it finally clicked, I became even more impressed with both the novel and the research behind it.

The Invention of Wings makes early nineteenth century Charleston come alive - I could practically feel its pulse. Sarah Grimke is our window into its slave-owning, high-society circles. At the beginning of the novel she receives a slave, complete with a lavender bow tied around her neck, as an eleventh birthday present. Hetty, that slave, also known as Handful, represents the opposite end of the spectrum. Their stories, perfectly balanced and told in alternating voices, give structure to the novel. They eventually collide with the abolition movement and the birth of the struggle for women's rights.

I especially loved the scene featuring locally-famous abolitionist Gerritt Smith set in Peterboro, NY (just minutes from my home). My proximity to Seneca Falls also makes Lucretia Mott and others involved in the women's rights movement seem like local heroes. It's always a thrill for me when they pop up in novels. Other elements I enjoyed were the Quakers and quilting - particularly the "story quilt" as a means for illiterate slaves to share their lives with future generations.

The authors note at the end was much appreciated, and especially enjoyable on audio as it is her own voice. Kidd explains in great detail which parts of the novel are factual and what is imagined. She explains how the novel was born and offers suggestions for further reading.

The beginning of the The Invention of Wings marked a strange audio first for me. Most of you know I love audiobooks and find many narrator's voices to be immediately recognizable, yet I have never "heard" a character from another novel before. This time I was initially puzzled to hear Skeeter from The Help (an all-time favorite audio) and wondered what she was doing here. It took several minutes for me to erase Skeeter and begin to hear Sarah Grimke.

Jenna Lamia and Adepero Oduye are both outstanding as they give voice to Sarah and Hetty. Lamia, of course, is an old favorite from The Help, but Oduye is a new and promising voice. Listening to these two very talented women added another dimension to the story.

Bottom line:  I highly recommend listening to this novel. It is easily one of my favorite audiobooks of the year.