Tuesday Intro: The Summer Without Men 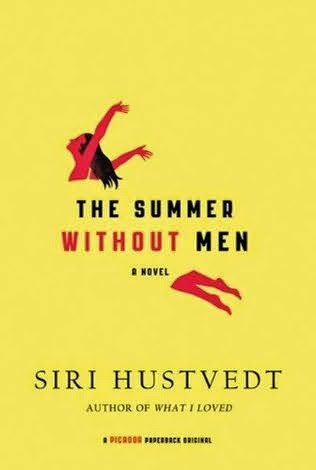 Sometime after he said the word pause, I went mad and landed in the hospital. He did not say I don't ever want to see you again or It's over, but after thirty years of marriage pause was enough to turn me into a lunatic whose thoughts burst, ricocheted, and careened into one another like popcorn kernels in a microwave bag. I made this sorry observation as I lay on my bed in the South Unit, so heavy with Haldol I hated to move. The nasty rhythmical voices had grown softer, but they hadn't disappeared, and when I closed my eyes I saw cartoon characters racing across pink hills and disappearing into blue forests. In the end, Dr. P. diagnosed me with Brief Psychotic Disorder, also known as Brief Reactive Psychosis, which means that you are genuinely crazy but not for long. If it goes on for more than one month, you need another label. Apparently, there's often a trigger or, in psychiatric parlance, "a stressor," for this particular form of derangement. In my case, it was Boris or, rather, that Boris was having his pause. They kept me locked up for a week and a half, and then they let me go. I was an outpatient for a while before I found Dr. S., with her low musical voice, restrained smile, and good ear for poetry. She propped me up - still props me up, in fact.

The Summer Without Men
by Siri Hustvedt

On Sunday evening, I planned to sample a few pages of several books on my kindle before deciding what to read next. I began with The Summer Without Men, and those few pages somehow turned into forty.

Hustvedt's writing style was immediately engaging and I felt drawn to the main character (we are close in age, although far apart in circumstances). I have high hopes for the women with who will become Mia's summer companions, too.


Mia Fredrickson, the wry, vituperative, tragicomic poet narrator of The Summer Without Men, has been forced to reexamine her own life. One day, out of the blue, after thirty years of marriage, Mia’s husband, a renowned neuroscientist, asks her for a “pause.” This abrupt request sends her reeling and lands her in a psychiatric ward. The June following Mia’s release from the hospital, she returns to the prairie town of her childhood, where her mother lives in an old people’s home. Alone in a rented house, she rages and fumes and bemoans her sorry fate. Slowly, however, she is drawn into the lives of those around her—her mother and her close friends,“the Five Swans,” and her young neighbor with two small children and a loud angry husband—and the adolescent girls in her poetry workshop whose scheming and petty cruelty carry a threat all their own.

From the internationally bestselling author of What I Loved comes a provocative, witty, and revelatory novel about women and girls, love and marriage, and the age-old question of sameness and difference between the sexes.

Have you read Siri Hustvedt? I have a feeling I'll be reading much more of her work.

Every Tuesday, Diane at Bibliophile by the Sea posts the opening paragraph (sometime two) of a book she decided to read based on the opening. Feel free to grab the banner and play along.
Posted by JoAnn at 7:02 AM