Orange is the New Black by Piper Kerman (audio) 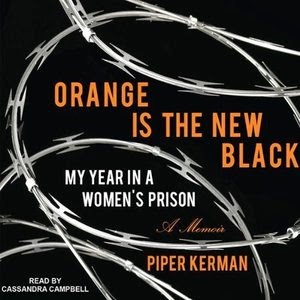 Orange is the New Black: My Year in a Women's Prison
by Piper Kerman
narrated by Cassandra Campbell
Tantor Audio, 2012
11 hours and 14 minutes
source: purchased during audible's last BOGO sale

Publisher's summary:
With a career, a boyfriend, and a loving family, Piper Kerman barely resembles the reckless young woman who delivered a suitcase of drug money 10 years ago. But that past has caught up with her. Convicted and sentenced to 15 months at the infamous federal correctional facility in Danbury, Connecticut, the well-heeled Smith College alumna is now inmate #11187-424 - one of the millions of women who disappear "down the rabbit hole" of the American penal system.

From her first strip search to her final release, Kerman learns to navigate this strange world with its strictly enforced codes of behavior and arbitrary rules, where the uneasy relationship between prisoner and jailer is constantly and unpredictably recalibrated. She meets women from all walks of life, who surprise her with small tokens of generosity, hard words of wisdom, and simple acts of acceptance. Heartbreaking, hilarious, and at times enraging, Orange is the New Black offers a rare look into the lives of women in prison, why it is we lock so many away, and what happens to them when they're there.

My thoughts:
I'm not sure why it took me so long to figure out that the television series Orange is the New Black is based on a book, but once I did it was only a matter of time before the book made its way into to my hands or in this case, ears. When I discovered Cassandra Campbell was the narrator, it made my decision to listen a no-brainer.  I can't remember the last time eleven hours passed so quickly. For several days, I packed my schedule with tasks that could be accomplished while listening. My house hasn't been this clean in ages!

Orange is the New Black is a memoir about life inside the Danbury correctional facility as experienced by a thirty-something upper middle class, white, Smith College alumna while serving mandatory time for a drug conviction nearly ten years after the fact. {She delivered a suitcase containing drug money.} Most of us will never endure an experience like this, but are naturally curious.

Once you get past the circumstances of her crime (talk about bad choices!), it's easy to relate to Piper Kerman.  Out of place among the other inmates, she is able - after a few missteps - to learn the unwritten code of conduct that governs daily life. She discusses everyday challenges  - friendships among inmates, job assignments, prison food, recreation, visiting hours, loss of freedom, and personally humiliating security measures. I was especially impressed with small kindnesses shown by other inmates and their ingenuity in making what they needed out of what was available.

Kerman also shares her experience in dealing with "the system" and relating to guards and councilors.  Most appalling to me was the utterly ineffective discharge planning (can't think of the proper term, so falling back on my healthcare vocabulary here).  The inmates desperately needed help with the basics of finding shelter and employment, but that type of training was not to be found in the programs which were offered.

About the series:
I've watched three episodes so far this week. At just under an hour, they're perfect for a brisk walk on the treadmill. The series seems to follow the book fairly closely, but has been sensationalized for television. I'm enjoying the addition of other inmates' backstories, which were not addressed in the book.

Bottom line:
This book will more than satisfy any curiosity you have about life behind bars. Give it a try!