The Boys in the Boat by David James Brown 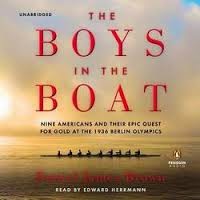 The Boys in the Boat
by David James Brown
narrated by Edward Herrmann
Penguin Audio, 2013
14 hours and 25 minutes
source: library

Publisher's summary:
Daniel James Brown's robust book tells the story of the University of Washington's 1936 eight-oar crew and their epic quest for an Olympic gold medal, a team that transformed the sport and grabbed the attention of millions of Americans. The sons of loggers, shipyard workers, and farmers, the boys defeated elite rivals first from eastern and British universities and finally the German crew rowing for Adolf Hitler in the Olympic games in Berlin, 1936.

The emotional heart of the story lies with one rower, Joe Rantz, a teenager without family or prospects, who rows not for glory, but to regain his shattered self-regard and to find a place he can call home. The crew is assembled by an enigmatic coach and mentored by a visionary, eccentric British boat builder, but it is their trust in each other that makes them a victorious team. They remind the country of what can be done when everyone quite literally pulls together - a perfect melding of commitment, determination, and optimism.

Drawing on the boys' own diaries and journals, their photos and memories of a once-in-a-lifetime shared dream, The Boys in the Boat is an irresistible story about beating the odds and finding hope in the most desperate of times - the improbable, intimate story of nine working-class boys from the American west who, in the depths of the Great Depression, showed the world what true grit really meant.

Who would guess a book about crew could be so exciting?  Before beginning, despite living on a lake where local college crew trains and the coxswain's voice is frequently heard drifting across the water, I knew next to nothing about rowing. In addition, I wasn't especially interested in learning more. So when I received an audio review copy, I promptly donated it to the library. Glowing reviews began to appear soon afterwards and lingering suspicions that I'd made a mistake grew.

When my book club decided to read The Boys in the Boat, I borrowed my previously donated copy, began to listen, and found myself completely enthralled by the end of the prologue. As the blurb notes, one of the rowers, Joe Rantz, is at the emotional heart of this story, but the book includes so much more. The reader/listener gets to know the coaches and the other men in the boat. We witness their hard work, dedication, determination, and, most importantly, learn what it means to function as a team.

I also enjoyed the book's strong feeling of time and place - from the economic hardships of the 1930's and pre-war tensions, to the college crew scene with its historic traditions and rivalries. The descriptions of the actual races, whether on New York's Hudson River or for Olympic gold in Berlin, are among the most exciting passages I've experienced on audio. At times, it felt like I could scarcely breathe! I must mention my delight at the passing mention of Louis Zamproini (from Unbroken), too.

This book would be a great fit for fans of crew or the Olympics, of course, but I think it has a much broader appeal and would encourage anyone interested in adding more nonfiction to their reading mix to give The Boys in the Boat a try!

A note on the audio production:
Edward Herrmann has an excellent voice for nonfiction. I found his performance here, as in Unbroken by Lauren Hillenbrand, to be perfectly paced, engaging, and exciting, without being overly dramatic.

As always with audio nonfiction, be sure to take a look at the print edition, too. You won't want to miss the photographs.