The Sunday Salon: When It Rains...

You know that old saying... and lately it applies not only to the weather, but also my out-of-control library queue.

As to the weather,  the rain actually started in late June. After several days of torrential downpours, a couple of towns in the area experienced severe flooding. FEMA has recently stepped up with federal aid for the victims, but the rain keeps falling. Not constantly, but a storm seems to roll in every afternoon. 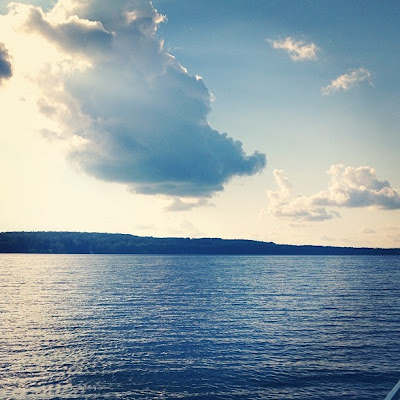 We are on relatively high ground, but a few streets in our village flooded and the lake's water level reached an unprecedented high last week. This prompted the town to declare a state of emergency for the lake on Wednesday and order a 'no wake' zone, prohibiting motorized watercraft. An eerie silence descended over the water on a beautiful summer evening ... no motors in the distance, no shrieks of laughter from kids water-skiing or tubing, no conversations between fishermen carried unknowingly over the water... just the sound of birds, waves, and the occasional kayak paddle. So peaceful!

The water has now receded to a high normal level, but we have yet to receive word that the state of emergency has been lifted, although there were a few boats on the lake yesterday evening. 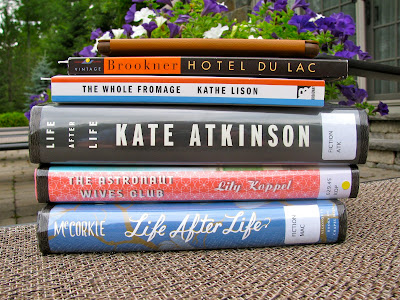 Now, about that library queue...

As I have been glued to The Woman Upstairs all week, several of my library holds arrived at the same time. I thought I was picking up Life After Life by Kate Atkinson (finally, after months of waiting), but when I got to the circulation desk, they also had The Astronaut Wives Club by Lily Koppel and Life After Life by Jill McCorkle ready to go. {I don't think I've ever had two books with the same title by different authors before!}

When I got home, there was an email informing me that e-book holds of The Dinner by Herman Koch and Behind the Beautiful Forevers by Katherine Boo were available.

All those books... and I had been planning on starting Hotel du Lac by Anita Brookner for Heavenali's Brookner Reading Month and The Whole Fromage by Kathe Lison for Paris in July.

Someone mentioned in passing this week that it would be great if library hold lists worked like Netflix, and I heartily agree! I'm considering returning them all and starting over again.

Here's the plan for now...  I read the first chapter of Hotel du Lac last evening and want to continue. I'm intrigued by the story and really like the writing. Since it's on my kindle and I prefer e-reading at bedtime, I'm several chapters into The Dinner, too. They will be the books I concentrate on this week. Then, we'll see if I can carve out enough time for the others before they are overdue.

What will you be reading this week?
Posted by JoAnn at 11:06 AM