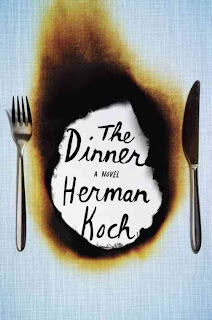 "We were going out to dinner. I won't say which restaurant, because next time it might be full of people who've come to see whether we're there. Serge made the reservation. He's always the one who arranges it, the reservation. This particular restaurant is one where you have to call three months in advance - or six, or eight, don't ask me. Personally, I'd never want to know three months in advance where I'm going to eat on any given evening, but apparently some people don't mind. A few centuries from now, when historians want to know what kind of crazies people were at the start of the twenty-first century, all they'd have to do is look at the computer files of the so-called "top" restaurants. That information is kept on file - I happen to know that. If Mr. L. was prepared to wait three months for a window seat last time, then this time he'll wait five months for a table beside the men's room - that's what restaurants call "customer relations management."

The Dinner
by Herman Koch

I started this book on the train Sunday, was drawn in quickly, and read half of it before arriving in New York. I hope to finish this unusual novel within the next day or two.