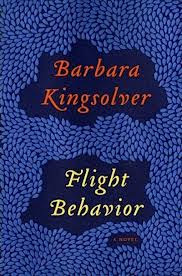 "A certain feeling comes from throwing your good life away, and it is one part rapture.  Or so it seemed for now, to a woman with flame-colored hair who marched uphill to meet her demise.  Innocence was no part of this.  She knew her own recklessness and marveled, really, at how one hard little flint of thrill could outweigh the pillowy, suffocating aftermath of a long disgrace.  The shame and loss would infect her children too, that was the worst of it, in a town where everyone knew them. Even the teenage cashiers at the grocery would take an edge with her after this, clicking painted fingernails on the counter while she wrote her check, eying the oatmeal and frozen peas of an unhinged family and exchanging looks with the bag boy: She's that one.  How they admired their own steadfast lives.  Right up to the day when hope in all its versions went out of stock, including the crummy discount brands, and the heart had just one instruction left: run.  Like a hunted animal, or a racehorse, winning or losing felt exactly alike at this stage, with the same coursing of blood and shortness of breath.  She smoked too much, that was another mortification to throw in with the others.  But she had cast her lot.  Plenty of people took this way out, looking future damage in the eye and naming it something else.  Now it was her turn.  She could claim the tightness in her chest and call it bliss, rather than the same breathlessness she could be feeling at home right now while toting a heavy laundry basket, behaving like a sensible mother of two."

I plan to start this book later today; it's my book club's August selection. I've read Kingsolver on and off over the years and have enjoyed, to varying degrees The Bean Trees, Pigs in Heaven, Animal Dreams, The Poisonwood Bible, Prodigal Summer (my favorite), and Animal, Vegetable, Miracle. I haven't read her most recent novels, so look forward to catching up with her work.

What do you think of the opening? Would you keep reading this novel?

Every Tuesday, Diane at Bibliophile by the Sea posts the opening paragraph (sometime two) of a book she decided to read based on the opening. Feel free to grab the banner and play along.
Posted by JoAnn at 7:55 AM