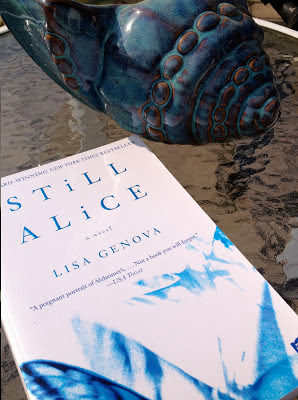 Summary (from Goodreads):
Alice Howland - Harvard professor, gifted researcher and lecturer, wife, and mother of three grown children - sets out for a run and soon realizes she has no idea how to find her way home. She has taken the route for years, but nothing looks familiar. She is utterly lost. Medical consults reveal early-onset Alzheimer's.

Alice's slowly but inevitably loses memory and connection with reality, told from her perspective. She gradually loses the ability to follow a conversational thread, the story line of a book, or to recall information she heard just moments before. Genova's debut shows the disease progression through the reactions of others, as Alice does, so readers feel what she feels - a slowly building terror.

My thoughts:
Still Alice is a devastatingly sad  portrayal of early onset Alzheimer's told from the point of view of the victim - in this case a 50 year old Harvard professor, wife, and mother of three. Alice's character is so real, the reader seems to experience her decline as well as her family's struggle to cope.

I suggested Still Alice  to my book club a couple of years ago, but it was rejected on the possibility of being "too depressing".  It took a while, but I decided to read it and see for myself. Let me tell you, I literally sobbed toward the end of the book.

There is much in this novel to discuss with a group and it begs for sharing of personal stories, but now that I've read it,  I probably will not suggest it again.  Instead, I will mention it during the time reserved for additional reading recommendations.

While Alice's story is so immediate and informative, the writing struck me as utilitarian and, at times, almost clunky. I marked some passages for ideas, but found no quotes to share. However, the novel is important to raise understanding and awareness of early onset Alzheimer's, the disease in general, and its impact on both victims and family members.

Bottom line:
Still Alice is a novel to be read for the story, with allowances made for the writing.