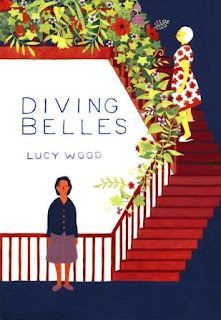 "Iris crossed her brittle ankles and folded her hands in her lap as the diving bell creaked and juddered towards the sea. At first, she could hear Demelza  shouting and cursing as she cranked the winch, but the as bell was cantilevered away from the deck her voice was lost in the wind. Cold air rushed through the open bottom of the bell, bringing with it the rusty smell of The Matriarch's  liver-spotted flanks and the brackish damp of seaweed. The bench Iris was sitting on was narrow and every time the diving bell rocked she pressed against the footrest to steady herself.  She kept imagining that she was inside a church bell and that she was the clapper about to ring out loudly into the water, announcing something. She fixed her eyes on the small window and didn't look down. There was no floor beneath her feet, just a wide open gap and the sea peaked and spat. She lurched downwards slowly, metres away from the side of the trawler, where a layer of barnacles and mussels clung on like the survivors of a shipwreck."*

Diving Belles, a short story collection, will be released on August 7. I read the first story over the weekend and found Wood's voice and writing style to be very engaging. What do you think of the intro?

*This quote is taken from an Advance Reading Copy, the final product may be slightly different.