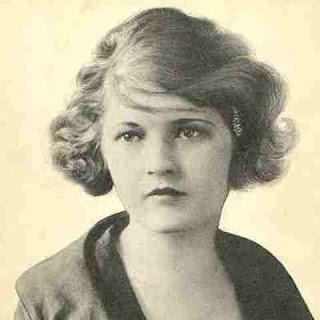 Since I am currently reading F. Scott Fitzgerald's novel Tender is the Night,  Zelda's birthday must be noted. She most certainly influenced her husband's writing, and the character of Nicole Diver in Tender is the Night bears a striking similarity to Zelda.


It's the birthday of writer and socialite Zelda Fitzgerald (books by this author), born Zelda Sayre in Montgomery, Alabama (1900). She was named after the fictional gypsy heroine in Zelda's Fortune (1874), one of her mother's favorite books. She was the youngest of five children, and she rebelled against the strict discipline of her father, an Alabama Supreme Court judge. She snuck out of her window at night, smoked cigarettes, bobbed her hair, and wore a flesh-colored swimsuit so that people would think she was swimming nude. She spent her evenings at dances and parties with the officers stationed at nearby Camp Sheridan, and they competed for her attention. One officer performed the full manual of arms drill outside her door, and others took turns trying to outdo each other with fancy airplane stunts in the sky above the Sayre household.

It was at Camp Sheridan that Zelda met a young officer named Scott Fitzgerald. He was beautiful, like Zelda — they were both petite, with blond hair and light eyes. Years later, in her autobiographical novel Save Me the Waltz (1932), she wrote: "He smelled like new goods. Being close to him with her face in the space between his ear and his stiff army collar was like being initiated into the subterranean reserves of a fine fabric store exuding the delicacy of cambrics and linen and luxury bound in bales." Scott and Zelda spent a lot of time together, but she didn't want to commit to him; even though he was confident that he was going to be rich and famous, Zelda was hesitant, and her parents were unconvinced. She wrote to him: "Mamma knows that we are going to be married some day — But she keeps leaving stories of young authors, turned out on a dark and stormy night, on my pillow — I wonder if you hadn't better write to my Daddy — just before I leave — I wish I were detached — sorter without relatives. I'm not exactly scared of 'em, but they could be so unpleasant about what I'm going to do."

After the publication of Fitzgerald's first novel, This Side of Paradise (1920), Zelda agreed to marry Scott. They became the most famous couple of the Jazz Age. They were the center of attention at parties, where their drunken exploits became the stuff of legend.

Zelda was a writer in her own right, and Scott borrowed from her ideas and sometimes copied writing from her verbatim. When they were dating in Montgomery, Zelda showed Scott her diary, and he used that and her letters in This Side of Paradise. He had modeled the main character, Rosalind, after a woman he had been in love with at Princeton, named Ginevra King; but after meeting Zelda, he reworked the character of Rosalind until she was a combination of both women.

When Zelda was hired to write a review of The Beautiful and the Damned for the New York Herald Tribune, she wrote: "It seems to me that on one page I recognized a portion of an old diary of mine which mysteriously disappeared shortly after my marriage, and also scraps of letters which, though considerably edited, sound to me vaguely familiar. In fact, Mr. Fitzgerald — I believe that is how he spells his name — seems to believe that plagiarism begins at home." She also encouraged readers to buy the book so that Scott could buy her a new dress and a platinum ring.

She said, "I don't want to live — I want to love first, and live incidentally."