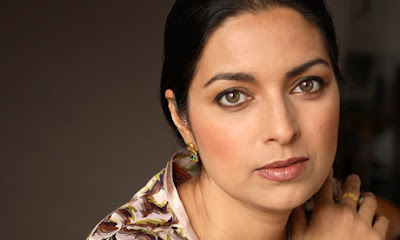 Today is the birthday of Jhumpa Lahiri (books by this author), born in London (1967). Her parents were Bengali immigrants from India. When Lahiri was two years old, her father got a job as a librarian at the University of Rhode Island, and they moved to America. On weekends, the whole family would get together with other Bengali families, sometimes driving for hours to other states for a party. The adults cooked Bengali food and spoke Bengali and reminisced; the kids all watched television together. And even though she's lived in America from toddlerhood, she struggles with not feeling American. "For me," she says, "there is sort of a half-way feeling."

Throughout her childhood, Lahiri wrote stories to entertain herself. She went to college at Barnard, then to graduate school at Boston University. She was on the verge of going to work in retail when Houghton Mifflin agreed to publish her first book for a small advance. That book was The Interpreter of Maladies (1999), a collection of nine stories about Bengalis and Bengali-Americans living in suburban New England. The publishers didn't expect to sell many copies so they only released it in trade paperback. As expected, it didn't get much notice at first, but one day she got a phone call from a woman from Houghton Mifflin, asking a lot of questions about Lahiri's background. Lahiri assumed it was for promotional materials. "And then she said, 'You don't know why I am calling, do you?'" Lahiri recalled. "And I said, 'No, why are you calling?' And she said, 'You just won the Pulitzer.'" It was the first time a trade paperback had ever won the Pulitzer Prize.

Over the last few years, Jhumpa Lahiri has become a favorite author and I credit her with my recently developed love of short stories. Unaccustomed Earth was on my 'Best of' list several years ago and it lead me to the audio version of Interpreter of Maladies. I also enjoyed her novel, The Namesake, and hope another novel or short story collection will be published soon.