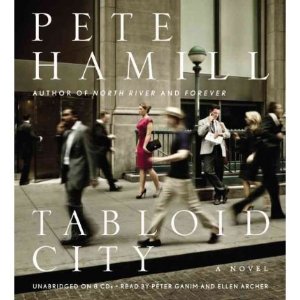 In a stately West Village townhouse, a wealthy socialite and her secretary are murdered. In the 24 hours that follow, a flurry of activity circles around their shocking deaths: The head of one of the city's last tabloids stops the presses. A cop investigates the killing. A reporter chases the story. A disgraced hedge-fund manager flees the country. An Iraq War vet seeks revenge. And an angry young extremist plots a major catastrophe.
The City is many things: a proving ground, a decadent playground, or a palimpsest of memories - an historic metropolis eclipsed by modern times. As much a thriller as it is a gripping portrait of the city of today, Tabloid City is a new fiction classic from the writer who has captured it perfectly for decades.

Tabloid City is a day-in-the-life kind of novel that only Pete Hamill could write. Set in New York City, it follows a handful of characters in alternating "datelines" over the course of roughly 24 hours.

The main character, Sam Briscoe, an aging editor of a struggling afternoon tabloid, appears to be modeled on Hamill himself. Briscoe obviously loves the newspaper business, but has serious concerns for its future. He is also an advocate of libraries and reading. Through his childhood memories and reminiscences of the city long ago, Briscoe echoes familiar themes from Hamill's speaking engagements and nonfiction. (My previous Pete Hamill post is here.)

But don't get the wrong idea - this novel is not all newspapers and nostalgia. It is firmly set in the present. The characters, immigrants to social elite, artists to terrorists, represent a true cross-section of life and provide an exciting multi-layered plot. The way their lives converge in unexpected ways reminded me of Let the Great World Spin by Colum McCann, but since it took place over one day, Tabloid City seemed more like a snapshot.


A passage I liked:


"At first Briscoe thought she saw him as a book she took down from the shelf, savored, and then returned to a higher shelf. But it lasted too long, like a serial by Dickens that had great gaps and greater and greater richness as it went on. He loved her more last week than he ever had, the richness of her, the plentitude of her that was part of his own consciousness, eve when he slept alone. Now some son of a bitch has torn away the last phase of that long narrative. We'll never live those final chapters." p.209


A Note on the Audio Production:
The audio production, narrated Peter Ganim and Ellen Archer, was well done. The short chapters focusing on a single character seemed perfectly suited to dual narrators, and Ganim and Archer skillfully changed their voices making it easy to differentiate between characters. After listening to the first eight hours in the car, I borrowed a print copy from the library because I had to finish the book.

My ratings:
the novel

Bottom line: Highly recommended for fans of Pete Hamill and those who enjoy novels set in New York City.

FTC disclosure: I received this audiobook from another blogger (thanks, Kathy!)