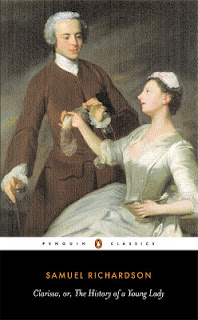 Terri and I are co-hosting a yearlong group read of Clarissa by Samuel Richardson. Links to April update posts are being collected here.

Just as I was about to hit the publish button for this post, a typo in the title made me laugh out loud - "Clarissa: April Progress Nots". Do you think it was a Freudian slip? According to our loose schedule, I should be at letter 160 or page 542. Instead, my bookmark is at letter 88, page 355.

March's letters were a struggle to read. In fact, it took me until mid-April to get through them. I read somewhere that Richardson tried to make Clarissa shorter. My suggestion would have been to cut out at least half of those letters. Besides being dull, they were repetitive. Bottom line: nothing actually happened in March.

The April letters (beginning at 73) improve dramatically as Clarissa's situation reaches the crisis stage. Letter 78 is positively riveting! It seems she will be carried off to Uncle Antony's against her will unless Miss Howe or Mr. Lovelace intervene. Miss Howe is unable to provided assistance, so Lovelace has become her only hope of escape.  I'm feeling a little suspicious of Lovelace at this point, and possibly even distrusting. Clarissa herself states that he is making unfounded assumptions about her feelings for him. Why is Lovelace offering to help Clarissa? Is he motivated by love, or something darker?

There were quite a few memorable quotes this month. I'll share one that made me laugh. Miss Howe to her mother, regarding hoop skirts (L74, p.292):


"I desire my hoop may have its full circumference. All they're good for, that I know, is to clean dirty shoes and to keep ill-mannered fellows at a distance."

At this rate, it looks like I'll finish the April letters by the end of May. Are you still on schedule? It may take me a couple more months to catch up.