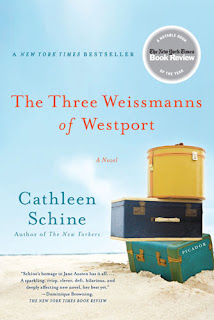 "When Joseph Weissmann divorced his wife, he was seventy-eight years old and she was seventy-five. He announced his decision in the kitchen of their apartment on the tenth floor of a large, graceful Central Park West building built at the turn of the last century, the original white tiles of the kitchen still gleaming on the walls around them. Joseph, known as Joe to his colleagues at work, but always called Joseph by his wife, said the words "irreconcilable differences," and saw real confusion in his wife's eyes.

In Joe's case it had very little to do with divorce. In Joe's case, as is so often the case, the reason for divorce was a woman. But a woman was not, unsurprisingly, the reason he gave his wife."

I'm about to start our next book club selection. The intro sounds very much like women's fiction, but we usually select lighter books for summer. My understanding is that The Three Weissmanns of Westport is a modern retelling of Sense & Sensibility, and several bloggers I trust have really enjoyed it. I love Jane Austen and think this might be fun. What do you think of the intro?