Tuesday Intro: Bring Up the Bodies by Hilary Mantel 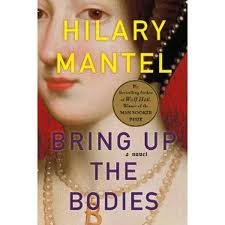 "His children are falling from the sky. He watches from horseback, acres of England stretching behind him; they drop, gilt-winged, each with a blood-filled gaze. Grace Cromwell hovers in thin air. She is silent when she takes her prey, silent as she glides to his fist. But the sounds she makes then, the rustle of feathers and the creak, the sigh and riffle of pinion, the small cluck-cluck from her throat, these are sounds of recognition, intimate, daughterly, almost disapproving. Her breast is gore-streaked and flesh clings to her claws.

Later Henry will say, 'Your girls flew well today.' The hawk Anne Cromwell bounces on the glove of Rafe Sadler, who rides by the king in easy conversation. They are tired; the sun is declining, and they ride back to Wolf Hall with the reins slack on the necks of  their mounts. Tomorrow his wife and two sisters will go out. These dead women, their bones long sunk in London clay, are now transmigrated. Weightless, they glide on the upper currents of the air. They pity no one. They answer to no one. Their lives are simple. When they look down they see nothing but their prey, and the borrowed plumes of the hunters: they see a flittering, flinching universe, a universe filled with their dinner."*

Bring Up the Bodies
by Hilary Mantel

Hilary Mantel's eagerly awaited sequel to the 2009 Man Booker Prize winning Wolf Hall  is on sale today. I plan to start reading later this week. The opening paragraphs seem a little unusual, but I am intrigued and look forward to continuing. What do you think of the intro? Is this book on your 'to read' list?

As a special treat for audiobook fans, click here to listen to an excerpt from Macmillan Audio. Bring Up the Bodies is narrated by the fabulous Simon Vance.

*This quote is from an uncorrected proof. The finished version may differ slightly.

Email ThisBlogThis!Share to TwitterShare to FacebookShare to Pinterest
Labels: historical fiction, Quote of the Week