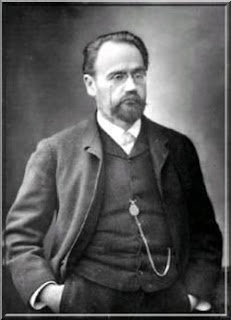 
Today is the birthday of Émile Zola (books by this author), born in Paris (1840). He was inspired by reading Charles Darwin to try to apply scientific principles of observation to the practice of writing fiction. The result was a 20-novel cycle, a kind of fictional documentary about the influence of heredity and environment on an extended family. It was called Les Rougon-Macquart. Some of the novels of the cycle include The Drunkard (1877), Nana (1880), and Germinal (1885).

Emile Zola was my first classic author discovery at Lakeside Musing. In the spring of 2009, I read Therese Raquin and my thoughts were eventually published in Yareah Magazine. I participated in The Classics Circuit's Zola tour in 2010 with a review of The Ladies' Paradise. In 2011, I turned to Zola's short stories from Dead Men Tell No Tales. I plan to read another of his novels later this year.