Tuesday Intro: Howards End is on the Landing 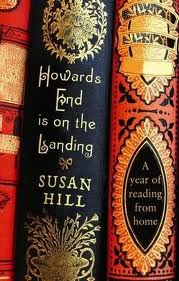 "It began like this. I went to the shelves on the landing to look for a book I knew was there. It was not. But plenty of others were and among them I noticed at least a dozen I realised I had never read.

And then I picked out a book I had read but forgotten I owned. And another and another. After that came the books I had read, knew I owned and realised that I wanted to read again.

I found the book I was looking for in the end, but by then it had become far more than a book. It marked the start of a journey through my own library."


Howards End is on the Landing
by Susan Hill

As the end of the year approaches,  I have come to the realization that I may only finish one or two more books. Perusing my shelves, I spied Susan Hill's book (subtitled A Year of Reading from Home), and thought it would be the perfect lead-in to The TBR Double Dare. I'm only proposing to read "from home" for three months, but these first few sentences have me even more excited to begin.