The Buddha In the Attic by Julie Otsuka 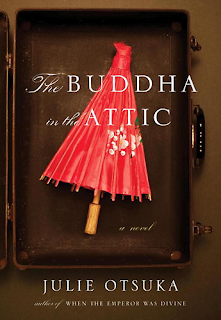 The Buddha in the Attic
by Julie Otsuka
Alfred A. Knopf, 2011
129 pages
source: borrowed

Publisher's Synopsis:
Julie Otsuka’s long awaited follow-up to When the Emperor Was Divine is a tour de force of economy and precision, a novel that tells the story of a group of young women brought over from Japan to San Francisco as ‘picture brides’ nearly a century ago.

In eight incantatory sections, The Buddha in the Attic traces their extraordinary lives, from their arduous journey by boat, where they exchange photographs of their husbands, imagining uncertain futures in an unknown land; to their arrival in San Francisco and their tremulous first nights as new wives; to their backbreaking work picking fruit in the fields and scrubbing the floors of white women; to their struggles to master a new language and a new culture; to their experiences in childbirth, and then as mothers, raising children who will ultimately reject their heritage and their history; to the deracinating arrival of war.

In language that has the force and the fury of poetry, Julie Otsuka has written a singularly spellbinding novel about the American dream.

And to elaborate:
The Buddha in the Attic provides an insightful look into the difficult lives of Japanese 'picture brides' in the early 20th century. As with her earlier novel, When The Emperor Was Divine, Otsuka's language is spare and powerful. This time though, while it serves to accentuate her point, it struck me as sing-song and repetitive.

"One of us blamed them for everything and wished that they were dead. One us us blamed them for everything and wished that she were dead. Others of us learned to live without thinking of them at all. We threw ourselves into our work and became obsessed with the thoughts of pulling one more weed. We put away our mirrors. We stopped combing our hair. We forgot about makeup. Whenever I powder my nose it looks just like frost on a mountain. We forgot about Buddha. We forgot about God. We developed a coldness inside us that still has not thawed. I fear my soul has died. We stopped writing home to our mothers. We lost weight and grew thin. We stopped bleeding. We stopped dreaming. We stopped wanting. We simply worked, that was all...."  (page 36-37)

Several bloggers loved this novel but, had it been much longer, I may not have finished.

Violet had a very different reaction and I urge you to read her review before deciding against this novel.