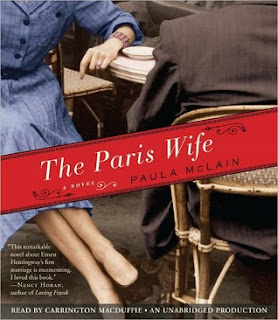 Quick summary from audible.com:
If what they say is true — that behind every great man there’s a great woman — then Hadley Richardson is the woman behind Ernest Hemingway. In the novel The Paris Wife, Paula McLain traces their relationship from its frowned-upon beginnings in Chicago to its painful end in Paris six years later, and narrator Carrington MacDuffie brings a cast of historical characters out of the required reading list and brightly to life.

My Thoughts:
Whatever your opinion of Ernest Hemingway's writing, the writer himself was certainly larger than life. Last year, I read Catherine Reef's biography geared toward young adults. This year I thoroughly enjoyed A Moveable Feast and the movie Midnight in Paris. Craving more Hemingway, I turned to The Paris Wife by Paula McLain.

It is told from the perspective of Hemingway's first wife, Hadley Richardson, and recounts their relationship from initial meeting through the tumultuous breakup six years later. During this time, Hemingway wrote many stories and a novel that would become The Sun Also Rises.  McLain includes many details of his writing process and, midway through the book, I purchased a copy of The Complete Short Stories of Ernest Hemingway  in order to read the stories as they were mentioned.

Other members of the 'Lost Generation', Scott and Zelda Fitzgerald, Gertrude Stein, Ezra Pound, and James Joyce, figure prominently in the story and add further color the novel. I doubt I'll ever tire of reading about this time and place.

The Paris Wife is not a book to race through. It's pace is slow, leisurely, and pleasant - easy to put aside and pick up again later. I thoroughly enjoyed Hadley's voice and insights, and admire McLain's creativity for her unique approach.

A note on the audio production:
This was my first experience with Carrington McDuffie. Her tone, inflection, and pace seemed perfectly matched to the novel. Her name in the credits will be a positive influence in choosing future audiobooks.

Bottom line: Highly recommended to anyone interested in Ernest Hemingway, Paris, and the 'Lost Generation'.
Posted by JoAnn at 7:26 AM