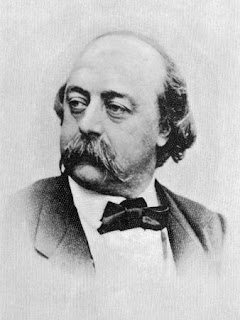 Today is the birthday of Gustave Flaubert (1821) (books by this author), born in Rouen, France. He was a notorious perfectionist in his work, and once said, "I spent the morning putting in a comma and the afternoon removing it." In 1851, he began what would become his first published novel, and his masterpiece. Five years later, Madame Bovary (1856) appeared in La Revue de Paris in serialized form. It's the story of Emma, a doctor's wife, who is dissatisfied with her life and longs to experience the passion, excitement, and luxury she has only read about in novels. She has two long-term affairs, accrues insurmountable debt, and ultimately takes her own life with arsenic.


From Madame Bovary, chapter nine: "Deep down in her heart, she was waiting and waiting for something to happen. Like a shipwrecked mariner, she gazed out wistfully over the wide solitude of her life, if so be she might catch the white gleam of a sail away on the dim horizon. She knew not what it would be, this longed-for barque; what wind would waft it to her, or to what shores it would bear her away. She knew not if it would be a shallop or a three-decker, burdened with anguish or freighted with joy. But every morning when she awoke she hoped it would come that day."

A month after the final installment of Madame Bovary was published, the French government banned the book, and hauled Flaubert up on charges of offending public and religious morality. Flaubert and his lawyers defended the book, saying that, by exposing vice, the novel was actually promoting virtue. Flaubert was narrowly acquitted, and Madame Bovary was published in book form two months later. The publicity and scandal of the trial contributed to its success.

Flaubert wrote: "It is a delicious thing to write, to be no longer yourself but to move in an entire universe of your own creating. Today, for instance, as man and woman, both lover and mistress, I rode in a forest on an autumn afternoon under the yellow leaves, and I was also the horses, the leaves, the wind, the words my people uttered, even the red sun that made them almost close their love-drowned eyes."

Madame Bovary was one of my favorites books of 2010.