*image credit
My official 'best of' list is still days away, but this quick survey has appeared on several of my favorite blogs and has helped focus my thinking.

A Tragic Honesty: The Life and Work of Richard Yates by Blake Bailey
The Easter Parade by Richard Yates
Emily, Alone by Stewart O'Nan

The Buddha in the Attic by Julie Otsuka

The Hunchback of Neiman Marcus by Sonya  Sones
I never thought a novel in verse could be so much fun.

Richard Yates and Stewart O'Nan... I recommended authors this year.

Series are to be avoided.

6. Favorite new authors you discovered in 2011?

What the Dead Know by Laura Lippman

State of Wonder by Ann Patchett 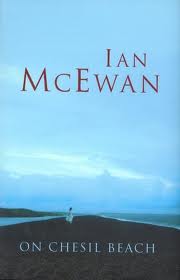 On Chesil Beach by Ian McEwan
This UK cover (a library sale find) is more attractive than its US counterpart.

Most memorable fictional characters include:

Jack from Room by Emma Donoghue
Emily from Emily, Alone by Stewart O'Nan
Bo and Elsa from The Big Rock Candy Mountain by Wallace Stegner

The Lost Wife by Alyson Richman was an intense, emotionally draining novel.

a novel by Toni Morrison (The Bluest Eye)

"You had to stay in a place to make it a home.  A home had to be lived in every day, every month, every year for a long time, till it was worn like an old shoe and fitted the comfortable curvatures of your life."

A Moveable Feast by Ernest Hemingway
Posted by JoAnn at 10:27 AM