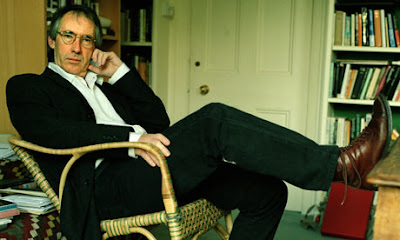 It's the birthday of novelist Ian McEwan (books by this author), born in Aldershot, England (1948). His father served in the army, so the boy grew up all over the world, including Singapore, Germany, and Libya. His father was a working-class Scot who had worked his way up to an officer's rank in the army. He drank too much, and Ian and his mother were both frightened of him. His mother was constantly anxious about trying to fit in with the other officers' wives, who spoke polished English with upper-class accents. McEwan said: "I don't write like my mother, but for many years I spoke like her, and her particular, timorous relationship with language has shaped my own. There are people who move confidently within their own horizons of speech; whether it is cockney, estuary, RP or valley girl, they stride with the unselfconscious ease of a landowner on his own turf. My mother, Rose, was never like that. She never owned the language she spoke. Her displacement within the intricacies of English class, and the uncertainty that went with it, taught her to regard language as something that might go off in her face, like a letter bomb. A word bomb. I've inherited her wariness, or more accurately, I learnt it as a child. I used to think I would have to spend a lifetime shaking it off. Now I know that's impossible, and unnecessary, and that you have to work with what you've got."


When McEwan was 11 years old, living in Libya, his parents sent him off to boarding school in England, where he eventually learned to correct his grammar and write polished sentences. But he kept the tendency to approach language with caution, and he is a notoriously slow and careful writer. He spent more than a year brainstorming before he began Atonement —he said, "I had a number of good descriptions of novels, as if they had already been written," but no actual writing to speak of. Then he took his sons away to a weekend resort and he had a vision of a young woman arranging flowers and thinking about the gardener outside her window. He managed to write a paragraph and a half, and that became the beginning of his second chapter of Atonement (2001). He wrote: "Partly because of her youth and the glory of the day, partly because of her blossoming need for a cigarette, Cecilia Tallis half ran with her flowers along the path that went by the river, by the old diving pool with its mossy brick wall, before curving away through the oak woods. The accumulated inactivity of the summer weeks since finals also hurried her along; since coming home, her life had stood still and a fine day like this made her impatient, almost desperate."

He said, "My ideal state as a reader when I'm reading other people is feeling I'm vaguely wasting my time when I'm not reading that novel."