The Witches of Eastwick by John Updike 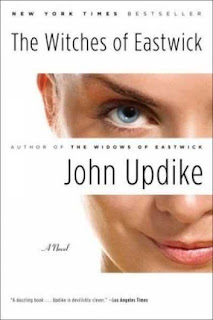 The Witches of Eastwick
by John Updike
1984, Alfred A. Knopf
307 pages

In the months following John Updike's death, I've sensed a renewed interest in his work. The Witches of Eastwick has been on my shelf for years, and this seemed like a good time to pull it down and finally read it.

From the back cover:
In a small New England town in that hectic era when the sixties turned into the seventies, there lived three witches. Alexandra Spofford, a sculptress, could create thunderstorms. Jane Smart, a cellist, could fly. The local gossip columnist, Sukie Ridgemont, could turn milk into cream. Divorced by hardly celibate, the wonderful witches one day found themselves under the spell of the new man in town, Darryl Van Horne, whose strobe-lit hot tub room became the scene of satanic pleasures.
To tell you any more, dear reader, would be to spoil the joy of reading this sexy, hexy novel by the incomparable John Updike.

Obviously, these blurbs are meant to sell books, but The Witches of Eastwick isn't quite as raunchy as this one makes it sound. However, it didn't quite deliver on the "joy of reading" either.

From the outset, it's clear the witches are not popular with other women of the community.

"...I don't know why these women bother to go on living, whores to half the
town, and not even getting paid. And those poor, neglected children of
theirs, it's a positive crime." pg. 127

As strange activities occur at the Van Horne mansion, tension between the witches and the community mounts.

"When she tossed the ball up, it became an egg and spattered all over her
upturned face, through the gut strings. Sukie threw down her racket in
disgust and it became a snake, that had nowhere to slither to." pg.
177

Newcomers to the mansion crowd lead to doubts, suspicion, more spells and an unfortunate resolution.

There are, however, passages that are vintage Updike, including a couple of my favorites:

"Certainly the fact of witchcraft hung in the consciousness of Eastwick, a lump.
a cloudy destiny generated by a thousand translucent overlays, a sort of
heavenly body, it was rarely breathe of and, though dreadful, offered the
consolation of completeness, of rounding out the picture..." p.210

"It [witchcraft] had the uncertain outlines of something seen through a
shower door and was viscid, slow to evaporate: for years after the events
gropingly and even reluctantly related here, the rumor of witchcraft stained
this corner of Rhode Island, so that a prickliness of embarrassment and unease
entered the atmosphere with the most innocent mention of Eastwick."

Unfortunately, there weren't enough passages like these and the book failed to live up to my expectations. In The Beauty of the Lilies will remain my favorite Updike novel and perhaps someday I'll read the Rabbit novels. I will pass on The Widows of Eastwick, Updike's final novel and sequel to Witches, released last summer.

My rating for The Witches of Eastwick is 3/5.
This book is my second read for My Year of Reading Dangerously challenge.
Posted by JoAnn at 9:08 AM