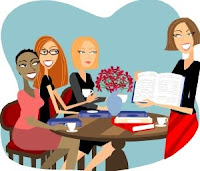 Around the same time I was raving about Olive Kitteridge by Elizabeth Strout here, I was also singing its praises to my book club. As a result, it was chosen as our February selection and last Friday was meeting day. From spring through Christmas, we meet at member's homes, but in the dead of winter, when roads and driveways become difficult to navigate and available parking is diminished by mountains of snow, we move to the local coffee shop. After purchasing our coffee, lattes, or tea, we made our way upstairs to the meeting room.

There was a relatively small crowd - just 6 of us. One member got called to sub at the elementary school, another received a last minute phone call from her MIL requesting a ride to a doctor's appointment, and one more was home with a sick child. What was remarkable about this particular gathering, though, was that everyone had read the book. After a brief period to catch up with each others lives, we started with the standard "Did you like the book?" before quickly moving on to a more in-depth discussion.

Initially I was relieved that nobody disliked the book (I always seem to take it personally if a suggestion of mine is panned by the group). The first part of our discussion focused on Olive herself - not being a particularly likable character, reminding one member of her mother (!), and even drawing a few laughs as we recounted some of Olive's escapades. We agreed that the author had done an excellent job of showing how Olive's character was able to grow and adapt. We talked about Olive's family and characters that made a guest appearance in just one story. We cited out favorite/least favorite stories and several memorable passages.

A good amount of discussion was spent on the structure of the book...the fact that it was not just a collection of short stories, nor was it a true novel. This was what put a couple people off, but it was something that really stood out for me. The short stories were, in fact, related and occurred over a period of time showing Olive as a young wife, mother and math teacher and, eventually, as a retired widow. Events were not necessarily connected as a novel would be, rather the reader was given each story as a snapshot and left to piece them together and fill in the blanks for herself.

We did come to the conclusion that the reader of the audiobook greatly added to my personal enjoyment (her Maine accent was perfect). I only checked the book out of the library to go back and reread favorite passages. While I was disappointed that the others did not come to love the book as I did, I was also relieved there was no strong criticism.