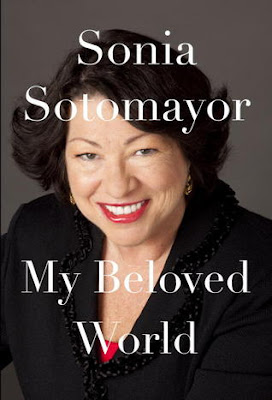 I was barely awake, and my mother was already screaming. I knew Papi would start yelling in a second. That much was routine, but the substance of their argument was new, and it etched that morning into my memory.
"You have to learn how to give it to her, Juli. I can't be here all the time!"
"I'm afraid to hurt her. My hands are trembling." It was true. When my father made his first attempt at giving me the insulin shot the day before, his hands were shaking so much I was afraid he would miss my arm entirely and stab me in the face. He had to jab hard just to steady his aim.

My Beloved World
by Sonia Sotomayor

One book often leads to another... As I was finishing the last few pages of Sisters in Law over the weekend, I knew I had to keep reading about the other women on the Supreme Court. Fortunately, my library had both the ebook and audiobook of My Beloved World available, and I downloaded both. I've read about a third of the book so far and am loving it!


The first Hispanic and third woman appointed to the United States Supreme Court, Sonia Sotomayor has become an instant American icon. Now, with a candor and intimacy never undertaken by a sitting Justice, she recounts her life from a Bronx housing project to the federal bench, a journey that offers an inspiring testament to her own extraordinary determination and the power of believing in oneself.

Email ThisBlogThis!Share to TwitterShare to FacebookShare to Pinterest
Labels: nonfiction, Nonfiction November, Quote of the Week