My Current Read: Sisters in Law by Linda Hirshman 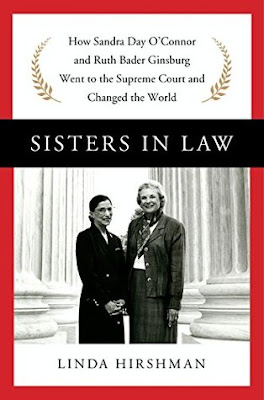 By the time the nation celebrates the birth of its democracy each Fourth of July, the nine justices of the Supreme Court have mostly left town. But before departing the capital for their summer recess, they must first decide all the cases they have heard since their current term began the previous October. The hardest, most controversial cases, where the unelected Court orders the society to change in a big way, are often left to the end. As the days for decision tick away in late June, the temperature in the courtroom is as hot and heavy as the Washington summer air.

On the morning of June 26, 1996, Justice Ruth Bader Ginsburg, the second woman appointed to the high court since its founding, slipped through the red velvet curtain behind the bench and took her seat at the end. Five places along the majestic curve sat Justice Sandra Day O'Connor, since 1981 the first woman on the Supreme Court, or the FWOTSC as she slyly called herself. Each woman justice sported an ornamental white collar on her somber black robe, but otherwise there was no obvious link between the First and Second, any more than between any of the other justices. On that day however, the public got a rare glimpse at the ties that bound the two most powerful women in the land.

Sisters in Law: How Sandra Day O'Connor and Ruth Bader Ginsburg Went to the Supreme Court and Changed the World
by Linda Hirshman

How did you find out about this book?
I noticed it on the new nonfiction shelf at the library last winter and, after taking a closer look, added it to my wish list.

Why are you reading it now?
It's Nonfiction November... and, in light of the recent election, current interest in the Supreme Court is high.

First impressions?
Hirshman has done her research. The book is well-written, informative, and most importantly, not too dry.

Which character do you relate to so far?
RBG has become something of a cult hero, but both women are pretty amazing. Their lives and approach to the law could not be more different.

Are you happy to continue?
Yes. I'm enjoying this book as a read/listen combination.

Where do you think the story will go?
Since it's nonfiction we already know where the story goes, but I'm picking up lots of interesting information along the way.

Click here for more information, including the goodreads summary. 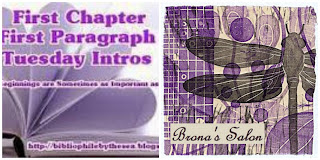 Tuesday Intro is hosted by Diane at Bibliophile by the Sea.
Brona's Salon is hosted by Brona at Brona's Books.
Posted by JoAnn at 8:17 AM

Email ThisBlogThis!Share to TwitterShare to FacebookShare to Pinterest
Labels: Nonfiction November, Quote of the Week