Book Brief: Ten Days in a Mad-House by Nellie Bly 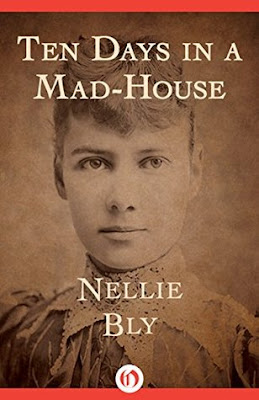 
Summary (from goodreads):
In 1887, Nellie Bly accepted an assignment from publisher Joseph Pulitzer of the New York World and went undercover at the lunatic asylum on Blackwell Island, America’s first municipal mental hospital. Calling herself “Nellie Brown,” she was able to convince policemen, a judge, and a series of doctors of her madness with a few well-practiced facial expressions of derangement.

At the institution, Bly discovered the stuff of nightmares. Mentally ill patients were fed rotten, inedible food; violently abused by a brutal, uncaring staff; and misdiagnosed, mistreated, or generally ignored by the doctors and so-called mental health experts entrusted with their care. To her horror, Bly encountered sane patients who had been committed on the barest of pretenses and came to the shocking realization that, while the Blackwell Island asylum was remarkably easy to get into, it was nearly impossible to leave.

This short book, a piece of investigative journalism, embarrassed an institution and helped bring about its eventual closing. It also prompted a grand jury investigation which was instrumental in bringing about policy changes and budget increases in the New York  Department of Public Charities and Corrections.

Bly's conversational tone held my interest throughout as she recounted her experiences at Blackwell Island asylum. I didn't realize there were female journalists at that time, or that reporters had such a long history of going undercover for a story. I found parts of Bly's narrative difficult to read. Thankfully, her account is short... much more would have become depressing.

Of particular interest is the fact that Bly, once admitted, did not keep up the feigned insanity:


From the moment I entered the insane ward on the Island, I made no attempt to keep up the assumed role of insanity. I talked and acted just as I do in ordinary life. Yet strange to say, the more sanely I talked and acted, the crazier I was thought to be by all....

She felt many of her fellow inmates had been wrongly admitted, and went on to speculate that conditions within the asylum were bad enough to make anyone insane:


What, excepting torture, would produce insanity quicker than this treatment? Here is a class of women sent to be cured. I would like the expert physicians who are condemning me for my action, which has proven their ability, to take a perfectly sane and healthy woman, shut her up and make her sit from 6 a.m. until 8 p.m. on straight-back benches, do not allow her to talk or move during these hours, give her no reading and let her know nothing of the world or its doings, give her bad food and harsh treatment, and see how long it will take to make her insane. Two months would make her a mental and physical wreck.

Overall this was a quick, interesting read.