Current Reading: The Boys in the Boat 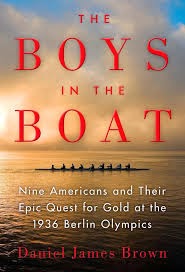 Along the waterfront, seaplanes from Gorst Air Transport company rose slowly from the surface of Puget Sound and droned westward, flying low under the cloud cover, beginning their short hops over to the naval shipyard at Bremerton. Ferries crawled away from Colman Dock on water as flat and dull as old pewter. Downtown, the Smith Tower pointed, like an upraised finger, toward somber skies. On streets below the tower, men in fraying suit coats, worn-out shoes, and battered felt fedoras wheeled wooden carts toward the street corners where they would spend the day selling apples and oranges and packages of gum for a few pennies apiece. Around the corner, on the steep incline of Yesler Way, Seattle's old, original Skid Road, more men stood in long lines, heads bent, regarding the wet sidewalks and talking softly among themselves as they waited for the soup kitchens to open. Trucks from the Seattle-Post Intelligencer rattled along cobblestone streets, dropping of bundles of newspapers. Newsboys in woolen caps lugged the bundles to busy intersections, to trolley stops, and to hotel entrances, where they held the papers aloft, hawking them for two cents a copy, shouting out the day's headline: "15,000,000 to Get U.S. Relief."

The Boys in the Boat: Nine Americans and Their Epic Quest for Gold at the 1936 Berlin Olympics
by Daniel James Brown

Descriptive, but not exactly riveting. That was my impression of this opening, but don't be fooled... this book gets interesting very quickly. My book club will meet next week to discuss The Boys in the Boat  and I've got both a print and an audio copy from the library. I'm primarily listening, but enjoy having the book to double check names, look at photographs, and read a few more pages each evening.

Every Tuesday, Diane at Bibliophile by the Sea posts the opening paragraph (sometime two) of a book she decided to read based on the opening. Feel free to grab the banner and play along.
Posted by JoAnn at 7:19 AM