The Gravity of Birds by Tracy Guzeman 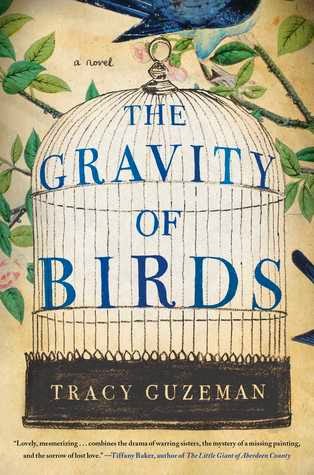 Summary (from Booklist):
Legendary artist Thomas Bayber calls reliable art historian Dennis Fincher and eccentric art authenticator Stephen Jameson to task them with an errand. Although Bayber stopped painting years ago, and his artwork has been extensively documented, he shows them a never-before-seen central panel in a triptych that depicts himself as a young man posed with two sisters, Alice and Natalie Kessler. What he wants Dennis and Stephen to find are the other two panels of the painting, which he gave to the sisters, who seem to have vanished without a trace in 1972. Their quest starts out inauspiciously, since Dennis refuses to fly, and Stephen doesn’t know how to drive, but before long, the two art aficionados become obsessed with finding the missing sisters and the missing panels even as they reveal their own grievous losses. Their narrative is interspersed with the story of the estranged Kessler sisters and their separate relationships with the brilliant if self-absorbed Bayber.

My thoughts:
I decided to take a chance on this debut author thanks to Darlene's review and a kindle daily deal... and I'm so glad I did!

For a second time this year, art played a key role in my reading. There are plenty of details in this novel about painting technique, the authentication process and insights into the business of art, and I found them fascinating. Birding figures into the plot, too, along with family relationships including, of course, deep dark secrets.

This is an ambitious and intricately plotted first novel.  A slow start was my only compliant, but in the end, my patience was amply rewarded. The Gravity of Birds may very well end up on my list of  2014 favorites.


"She'd come because this was where her past was happily captive, woven into the woods, sparkling off the surface of the lake. Her younger self still hid in the forest, deciphering the songs of birds, naming the stars in the night sky, half-listening for the reassuring call of her name by her parents, who laughed more and drank more and reminisced on the dock while dangling their pale legs in the cold, dark water. This was where she'd pushed her way through the thin paper skin of adolescence to feel the lovely stirrings of attraction, the polarized tugs of desire and insecurity."

"You don't see the ugliness because you don't want to. That's the job of an artist: to make people look at things - not just at things, but at people and at places - in a way other than they normally would. To expose what's hidden below the surface."

"How odd it was, all those years spent feeling old while she'd been young. And now that she couldn't be considered young anymore, not by anyone's standards, she didn't feel old. Instead, she felt like she'd finally caught up with herself and was exactly the age she was supposed to be."

"But people always do things they hadn't intended to do. You're angry. You allow yourself the luxury of considering a horrible thought. You don't have any intention of acting on it, of course, but you've given it a home in your head. It burrows in, pays attention, waits for an opportunity. And in the moment when something requires a decision, it's right there, seeming just as viable as the saner option, the morally correct response. So you choose. And with one decision, you've become a different person capable of doing something so reprehensible, you convince yourself it's completely justified. Because why else would you be doing it? And if, no, when you start to doubt, you can't see your way back to making it right, so you just keep moving forward, making it wrong over and over again."