The Girl You Left Behind by Jojo Moyes 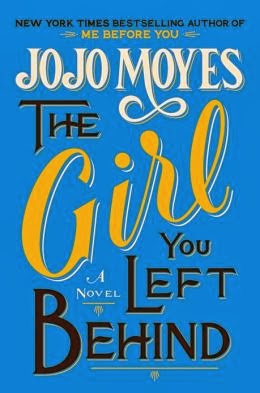 Summary (from goodreads):
In 1916, French artist Edouard Lefevre leaves his wife Sophie to fight at the Front. When her town falls into German hands, his portrait of Sophie stirs the heart of the local Kommandant and causes her to risk everything - her family, reputation and life - in the hope of seeing her true love one last time.

Nearly a century later and Sophie's portrait is given to Liv by her young husband shortly before his sudden death. Its beauty speaks of their short life together, but when the painting's dark and passion-torn history is revealed, Liv discovers that the first spark of love she has felt since she lost him is threatened...

In The Girl You Left Behind two young women, separated by a century, are united in their determination to fight for the thing they love most - whatever the cost.

My thoughts:
I rarely read two books by the same author in such quick succession, but this is my second Jojo Moyes novel in as many months… and I enjoyed it even more than Me Before You.

The Girl You Left Behind  utilizes a device that has become increasingly popular in recent years. It alternates between a story set in the past and one in the present. The German occupation of France during WWI serves as the historical backdrop, a lost love is central to both plot lines, and a painting connects the two.

I am not normally drawn to fiction featuring either art or war, but that didn't seem to matter here because Moyes' storytelling is simply captivating. I was hooked by the first chapter and once I reached the midpoint, I could not put the book down.

Moyes has a new novel coming this summer, but in the meantime I plan to work my way through her backlist.

Bottom line:
Very different from and, in my opinion, even better than Me Before You... The Girl You Left Behind is a must read!
Posted by JoAnn at 7:00 AM