Honeymoon in Paris by Jojo Moyes 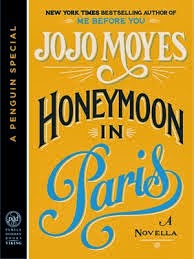 Description (from amazon):
At the heart of Jojo Moyes' heartbreaking new novel, The Girl You Left Behind, are two haunting love stories—that of Sophie and Édouard Lefèvre in France during the First World War, and, nearly a century later, Liv Halston and her husband David.

Honeymoon in Paris takes place several years before the events to come in The Girl You Left Behind when both couples have just married. Sophie is swept up in the glamour of Belle Époque Paris but discovers that loving a celebrated artist like Édouard Lefèvre brings undreamt of complications. Following in Sophie's footsteps a hundred years later, Liv, after a whirlwind romance, finds her Parisian honeymoon is not quite the romantic getaway she had been hoping for. . . .

This enchanting self-contained story will have you falling in love with both young brides, and with Paris then and now, and it is the perfect appetizer for the The Girl You Left Behind, a spellbinding story of love, devotion, and passion in the hardest of times.

My thoughts:
Honeymoon in Paris, a prequel to The Girl You Left Behind,  is really more an extended short story than novella... and is well worth reading even if you've already read Moyes' popular novel.

For me, reading Honeymoon in Paris was like visiting with old friends and discovering something new about them. I was surprised to learn that neither of the great marriages presented in The Girl You Left Behind had particularly auspicious beginnings. In fact, both honeymoon couples struggled through rocky situations involving differing expectations and miscommunication .

Moyes uses alternating chapters set in 1912 and 2002 to tell their stories and set the stage for what is to come in The Girl You Left Behind. If you haven't read that novel, you'll definitely want to pick it up after finishing Honeymoon in Paris.

Reading this lovely story felt like a mini-vacataion in Paris and is a perfect way to spend an hour or two some Sunday afternoon!