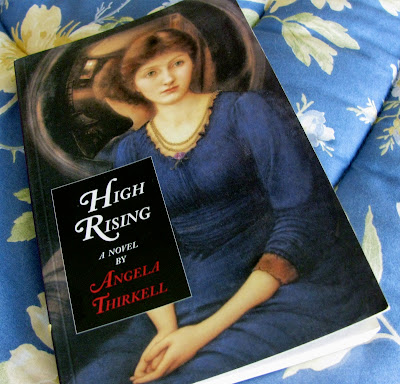 Angela Thirkell (1890-1961) was a very prolific English/Australian author. She wrote a book nearly every year from the 1930's through 1960, including her Barsetshire series which deals with life in an English country village and features many recurring characters. She has a small, but very devout following in our book blogging community and, after reading High Rising, I have joined their ranks.

A summary, from Goodreads:
In High Rising, Mrs. Morland, a widowed author, must attend to the deeper problems of country life while her son Tony drives everyone to distraction with his amazing combination of toy trains. Here Mrs. Thirkell demonstrates the characteristic style for which she is known and for which readers love her. This is fiction replete with gentle irony, grave absurdity, and urbane understatement.
"You read her, relaxed and smiling, from the first word to the last."-Chicago Sun

My one sentence review:
Reading High Rising reminded me of  Barbara Pym minus the clergy - a perfect comfort read!

A bit more:
High Rising was the perfect antidote to my classics-laden March reading. I became lost in 1930's English country life. Thirkell's first novel in her Barsetshire series offers romance, intrigue, and a totally delightful cast of characters, including two authors, a literary agent, a conniving secretary, a boy obsessed with trains, a country doctor, servants, and more. My understanding is that many of them will reappear in later books.

Although there are many novels in the Barsetshire series, they can be difficult to find. Thankfully, Virago has recently reissued High Rising and Wild Strawberries (books 1 and 2), and will hopefully release more in the future.

I read an older Moyer Bell edition and was distracted by an unending series of typos - some rather unfortunate, as "dear" Mrs. Morland became "deaf".

The search for  more Angela Thirkell novels has begun.

Last word:
I've officially changed my mind about series and can't wait to read the next novel, Wild Strawberries.