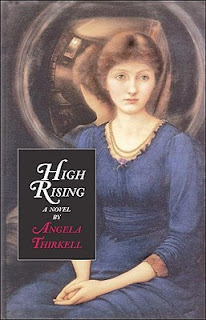 The headmaster's wife twisted herself round in her chair to talk to Mrs. Morland, who was sitting in the row just behind her.

"I can't make it out," she said reflectively, "why all the big boys seem to be at the bottom of preparatory schools and the small ones at the top. All those lower boys who got prizes were quite large, average children, but when we get to the upper forms they all look about seven, and undersized at that. Look at the head of the Remove for instance - he is just coming up the platform steps now."

Mrs. Morland looked. In front of her was the platform where the headmaster stood behind a rapidly diminishing pile of prizes. On each side were the assistant masters, wearing such gowns as they could muster. A shrimp-like little boy in spectacles was coming up to get his prizes.

This is the book that ended the TBR Double Dog Dare a few days early for me. The first novel of Thirkell's Barsetshire series sets the stage and introduces many characters that will appear again and again in later installments. Angela Thirkell has a small, but very loyal group of fans in my blogging circle. I'm enjoying High Rising  immensely and can feel my opinion on series in general shifting.

Have you read Angela Thirkell? What do you think of the opening?