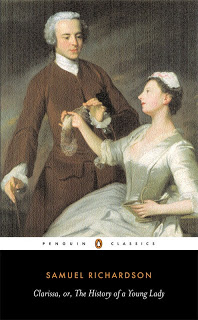 It all began with a simple twitter conversation. Sometime last December, Terri tweeted that she was going to read Clarissa. I responded with encouragement and interest. One thing lead to another. Soon we were a group of two dozen readers with a plan to read the 537 letters (roughly 1500 pages) on their corresponding dates  between January 10 and December 18.

Terri and I never expected such an enthusiastic response to our project. I also never dreamed Samuel Richardson could be so long-winded!  Early comments from the group focused on adjusting to the 18th century language, women's lives in the 1700's, and Richardson's obvious need of an editor, but soon we were all involved in Clarissa's plight. And then...

Most of us fell behind in our reading. Some abandoned it altogether. I got as far as the May letters (around page 600), but a small group persevered to the end.

Please join us in congratulating:

Let me know if I've missed anyone. Also, if you include a link to your final post in the comments, I will add it here.

Failing to complete my own project is an embarrassment, but I'm happy for the new friends and wonderful blogs I discovered in the process.  I will return to Clarissa eventually, but with a different approach - it will get my undivided attention. Reading Clarissa was always enjoyable, yet always a struggle to pick up after even short break.

So what's next? If you're up for another year-long group read, Amy and Iris are tackling War and Peace. I need a little break.

Terri and I thank you all for reading along with us this year.