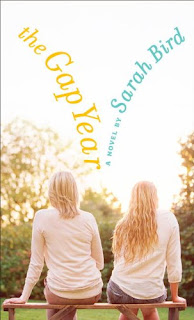 I once believed that I was psychologically incapable of being unhappy while submerged in water. Sunk in a bathtub up to my eyeballs, I was as free of earthly cares as a turtle sunning herself.


Yet here I am, wallowing through my tenth lap, feeling prickly and unsettled rather than weightless and dolphin-sleek. Instead of soaring into silent galaxies, I am snarled up in annoyance that my right eye is stinging because these crappy goggles are leaking. And that the ladies' aqua-cardio class in the shallow end is blaring "It's Raining Men". And that the flip-turning jerk I'm sharing a lane with drowns me every time he powers past. And that because I didn't expose my only child to enough dirt, Aubrey will hit the germ factory that is a college dorm with a weak immune system. And that she will die of spinal meningitis.*

The Gap Year
by Sarah Bird

I'm reading The Gap Year for a TLC Book Tour in August, as my twins prepare for their freshman years at college. They have both had a meningitis vaccine.

Does the opening grab you? Would you keep reading?

* This quote is from an uncorrected proof. The finished book may be slightly different.

Tuesday Intro is hosted by Diane at Bibliophile by the Sea.
Posted by JoAnn at 9:33 AM

Email ThisBlogThis!Share to TwitterShare to FacebookShare to Pinterest
Labels: Quote of the Week, TLC Book Tour