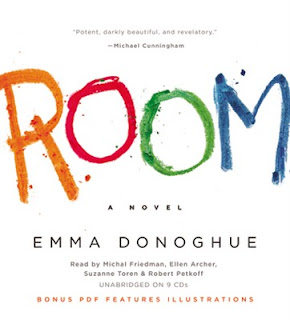 Publisher's Summary:
To five-year-old Jack, Room is the entire world. It is where he was born and grew up; it's where he lives with his Ma as they learn and read and eat and sleep and play. At night, his Ma shuts him safely in the wardrobe, where he is meant to be asleep when Old Nick visits.
Room is home to Jack, but to Ma, it is the prison where Old Nick has held her captive for seven years. Through determination, ingenuity, and fierce motherly love, Ma has created a life for Jack. But she knows it's not enough...not for her or for him. She devises a bold escape plan, one that relies on her young son's bravery and a lot of luck. What she does not realize is just how unprepared she is for the plan to actually work.
Told entirely in the language of the energetic, pragmatic five-year-old Jack, Room is a celebration of resilience and the limitless bond between parent and child, a brilliantly executed novel about what it means to journey from one world to another.

Why I listened:
I should begin by saying I made a conscious decision NOT to read Room. So many things about it turned me off: a five-year-old narrator, forced imprisonment, abuse. No, thank you. Besides, it sounded a little gimmicky.

When reviews began to appear, several bloggers I trust seemed to genuinely like Room. I was surprised, but still resisted. Eventually, a review of the audio version appeared in my google reader...intriguing, but did I really want to listen to a 5-year-old narrator for nearly eleven hours? Finally, during Audiobook Week, I won a twitter giveaway and selected Room as my prize.

The experience:
I was immediately captivated by Jack and his 'voice'. By the end of the first CD, I knew this was something special. Strangely enough, I also felt this would never work for me in print. Reading an entire book in a 5-year-old's language, even one as precocious as Jack, would simply be too tiresome.

Room had me looking for excuses to spend time in the car. Even the prospect of a dental appointment (30 minutes each way) was eagerly anticipated. By the end of the fifth CD, and with no further  plans to be alone in the car that day, I had to finish the book. Luckily, a print copy was available at the library. I went home and read the rest of the book in a single sitting.

Let me stress that this was not a disturbing or depressing book. It does deal with a horrific situation, but everything is filtered through Jack's level of understanding. Room is the work of a wonderfully creative and talented author.

A couple of things about the audio production stood out:
This is the first time I've listened to a book narrated by a child (or adult with a pitch-perfect child's voice), and it was my first experience with an audio that was partially 'dramatized'. I didn't think either would work for me but, again, I was surprised.

If you're at all curious, even if you've already read this one, I urge you to go to audible.com and listen to a sample of this audiobook. Jack may just charm you, too.

Bottom line:
Room may just be my favorite audio this year.