Tuesday Intro: The Belly of Paris 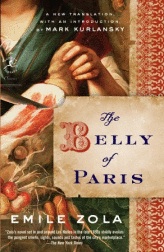 In the silence of a deserted avenue, wagons stuffed with produce made their way toward Paris, their thudding wheels rhythmically echoing off the houses sleeping behind rows of elm trees meandering on either side of the road. At the pont de Neuilly, a cart full of cabbages and another full of peas met up with eight carts of turnips and carrots coming in from Nanterre. The horses, their heads bent low, led themselves with their lazy, steady pace, a bit slowed by the slight uphill climb. Up on the carts, lying in their stomachs in the vegetables, wrapped in their black-and-gray-striped wool coats, the drivers slept with the reigns in their fists. Occasionally the light from a gas lamp would grope its way through the shadows and brighten the hobnail of a boot, the blue sleeve of a blouse, or the tip of a hat poking from the bright bloom of vegetables--red bouquets of carrots, white bouquets of turnips, or the bursting greenery of peas and cabbages.

The Belly of Paris
by Emile Zola
translated by Mark Kurlansky

This first paragraph doesn't have me bursting with excitement, but Zola certainly paints a vivid picture! I've enjoyed a couple of his novels and many short stories, but am still trying to decide on my next read. I hate this in-between book stage...

Email ThisBlogThis!Share to TwitterShare to FacebookShare to Pinterest
Labels: Emile Zola, Quote of the Week