Today's post wasn't going to be about Ernest Hemingway, but The Writer's Almanac reminded me of his birthday. Hemingway has been on my mind this month (Midnight in Paris, A Moveable Feast, a few stories), so the planned review must wait another day. 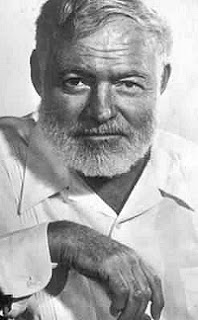 Today is the birthday of Ernest Hemingway (books by this author), born in 1899 in Cicero — now Oak Park — Illinois. He started his writing life as a journalist, but when he was in Paris after World War I, working as a foreign correspondent for the Toronto Star, he was encouraged to take a more literary turn by other American writers like Scott Fitzgerald, Ezra Pound, and Gertrude Stein. His first collection of short stories, Our Time, was published in 1925.

Hemingway's memoir A Moveable Feast (published posthumously in 1964) is about those years in Paris, and those writers. The title was chosen by his widow, Mary, from something Hemingway wrote to a friend: "If you are lucky enough to have lived in Paris as a young man, then wherever you go for the rest of your life, it stays with you, for Paris is a moveable feast." It is sentimental and cruel by turns, and not entirely honest, since he probably overstated the level of poverty he experienced there, but as he concludes the brief preface: "If the reader prefers, this book may be regarded as fiction. But there is always the chance that such a book of fiction may throw some light on what has been written as fact."

The memoir begins in medias res: "Then there was the bad weather. It would come in one day when the fall was over. We would have to shut the windows in the night against the rain and the cold wind would strip the leaves from the trees in the Place Contrescarpe. The leaves lay sodden in the rain and the wind drove the rain against the big green autobus at the terminal and the Café des Amateurs was crowded and the windows misted over from the heat and the smoke inside." And it ends, "There is never any ending to Paris and the memory of each person who has lived in it differs from that of any other. [...] But this is how Paris was in the early days when we were very poor and very happy."