A Literary Anniversary, of sorts... 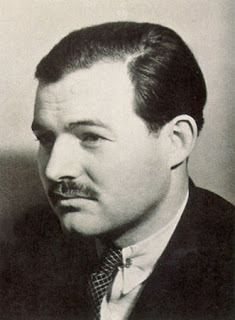 Ernest Hemingway has been the topic of much blogger buzz lately. Several of us have recently read A Moveable Feast (I promise my thoughts will be posted soon) and quite a few more have talked about the movie Midnight in Paris.

According to The Writer's Almanac:

Ernest Hemingway committed suicide 50 years ago today. He had found writing increasingly difficult after World War II, and he was also in pain from injuries he'd suffered during a safari in Africa. He had left his home in Cuba in 1960, after Fidel Castro's regime forced him out, and had settled in Ketchum, Idaho. He was increasingly anxious and depressed. He entered the Mayo Clinic in Rochester, Minnesota, twice in the eight months before to undergo electro-convulsive therapy, but he hated it and found it ineffective. He shot himself in the head with a 12-gauge shotgun; his widow, Mary, insisted at first that his death was accidental, and that he'd just been cleaning the weapon, but later she admitted it had been a suicide.

His granddaughter Lorian wrote in her memoir, Walk on Water (1998):
"I had visited my grandfather's grave in Ketchum the summer I had caught the marlin, arriving at the small hillside cemetery on a scalding July day, a half-finished fifth of vodka in one hand, a filter-tip cigar in the other. I'd made my way to the simple marble slab marked by a white cross, and stood swaying over the marker for a long time, expecting epiphany, resolution, a crashing, blinding flash of insight. ... I wanted to say something of value to the old man, perhaps that I had met a dare he had set forth by example, but nothing came. The neck of the bottle grew hot in my hand. I tipped it to my mouth, taking a long swig, then poured the rest, a stream of booze, clear as Caribbean waters, at the head of the marker. 'Here,' I said, 'have this,' and walked away."